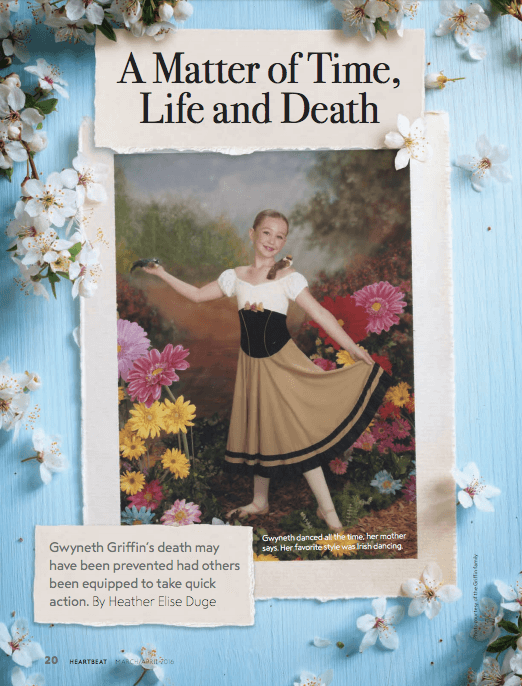 First, there was the shortness of breath. It happened on an ordinary day for 12-year-old Gwyneth Griffin of Stafford, Va.

She had a mild heart murmur and was born with a congenital heart defect — bicuspid aortic valve with stenosis — but she saw her cardiologist regularly and was cleared to do all the activities she loved: ballet, jazz, lyrical and her favorite, Irish dancing.

“Gwyneth could dance all day long, no matter where she was — at the grocery store, at school or in her room at home,” her mother, Jennifer Griffin, says.

Gwyneth’s cardiologist thought the shortness of breath could be from the demands of the middle schooler’s busy schedule. Several months later, Gwyneth and her father, Joel, attended a healthy teen-living event at her middle school. Joel went to watch his younger daughter at field day, while Gwyneth joined her friends at the track. After she ran one lap around the track, Gwyneth collapsed.

No one was able to perform CPR, so her friends immediately sent students to find the principal, a nurse, an automatic external defibrillator (AED) and Gwyneth’s dad.

“My husband arrived at the scene to find Gwyneth with no pulse,” Jennifer says. Normally, the school had an AED at the back of the gym. That one couldn’t be found, so someone ran to get the school’s second AED, which was in the front office.

When Joel got the AED, he followed the instructions and shocked Gwyneth twice. She regained her pulse.

Gwyneth spent seven weeks in the hospital as physicians worked to repair her organ systems. Her heart wasn’t strong enough for her to be taken off of sedation. The only way to give her a fighting chance was to put her on Extracorporeal Membrane Oxygenation (ECMO) — a machine that takes over the work of the heart and lungs.

Ultimately, it was determined that Gwyneth suffered a devastating and unrecoverable brain injury caused by the amount of time that passed after she collapsed. She passed away in 2012 at the age of 13.

“All of this was because, in the period of time between her collapse and my arrival on the scene, no one did anything,” Joel says in an American Heart Association video about his daughter.

Gwyneth’s story is a parent’s worst nightmare. Healthy, active teens aren’t supposed to collapse from sudden cardiac arrest (SCA). When the unthinkable does happen, time is of the essence. Quick action in the form of CPR or the use of an AED can help prevent sudden cardiac arrest from causing sudden cardiac death (SCD). Had those around Gwyneth started CPR immediately, her story may have turned out differently.

“More widespread training in CPR and availability of AEDs remarkably reduce the chance of SCA becoming SCD,” says Dr. William Scott, Professor of Pediatrics/Cardiology and Associate Vice Chairman at UT Southwestern Medical Center in Dallas. (Dr. Scott was not involved in Gwyneth’s care.) “Research has already shown that SCD occurs much less often in communities where there is widespread training in CPR and readily available AEDs.”

The Griffins are working hard to increase CPR training and the number of AEDs in communities. Their work has resulted in Gwyneth’s Law, which was passed in Virginia in 2013.

The governor of Virginia signed the law in March 2013, with the first two components going into effect immediately. Since the law was passed, four lives have been saved as a result of people receiving CPR training. The student-training component of Gwyneth’s Law is on track to be enacted in Virginia in the 2016-17 school year, and the state should have 75,000 trained individuals by next year. So far, 27 states require students to be CPR-trained. One of these is Maryland, where a child saved his sibling at home within one week of CPR training.

In December 2015, Gwyneth’s Gift Foundation — the actionable arm of Gwyneth’s Law — officially became a 501c3 non-profit organization. Through the Foundation, Jennifer and Joel focus on helping underprivileged and rural schools gain access and funding for AEDs. They also continue to advocate for the awareness and importance of CPR training for everyone. Scholarships will be provided to high school students and will one day include medical students studying cardiology, traumatic brain injury and neurology.

“Gwyneth’s death is hard to live with,” Jennifer says. “We will always wonder if she would have lived had things been different. It only takes one person to step up and do something to save a life.”