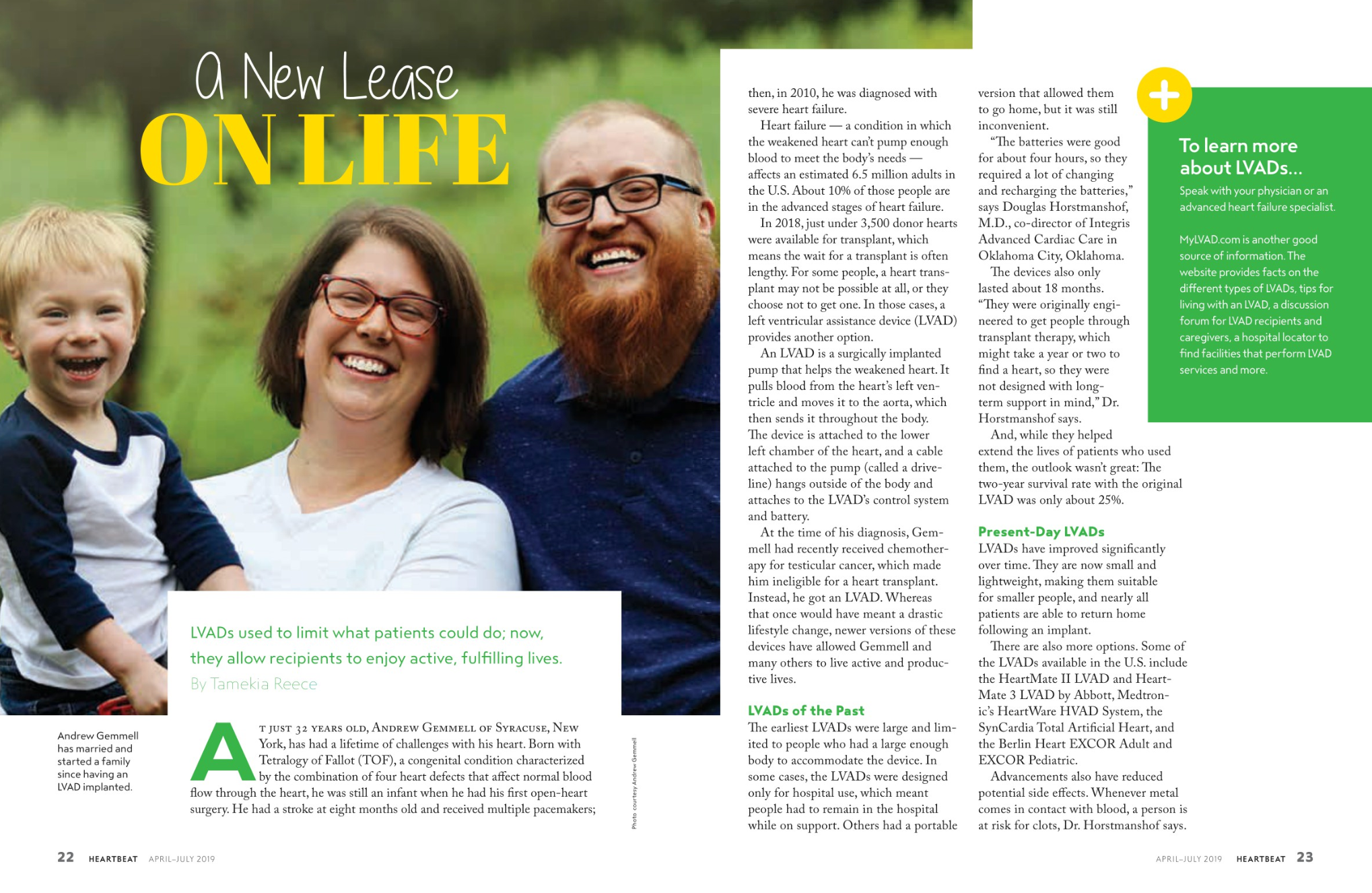 At just 32 years old, Andrew Gemmell of Syracuse, New York, has had a lifetime of challenges with his heart. Born with Tetralogy of Fallot (TOF), a congenital condition characterized by the combination of four heart defects that affect normal blood flow through the heart, he was still an infant when he had his first open-heart surgery. He had a stroke at eight months old and received multiple pacemakers; then, in 2010, he was diagnosed with severe heart failure.

Heart failure — a condition in which the weakened heart can’t pump enough blood to meet the body’s needs — affects an estimated 6.5 million adults in the U.S. About 10% of those people are in the advanced stages of heart failure. In 2018, just under 3,500 donor hearts were available for transplant, which means the wait for a transplant is often lengthy.

For some people, a heart transplant may not be possible at all, or they choose not to get one. In those cases, a left ventricular assistance device (LVAD) provides another option. An LVAD is a surgically implanted pump that helps the weakened heart. It pulls blood from the heart’s left ventricle and moves it to the aorta, which then sends it throughout the body. The device is attached to the lower left chamber of the heart, and a cable attached to the pump (called a driveline) hangs outside of the body and attaches to the LVAD’s control system and battery.

At the time of his diagnosis, Gemmell had recently received chemotherapy for testicular cancer, which made him ineligible for a heart transplant. Instead, he got an LVAD. Whereas that once would have meant a drastic lifestyle change, newer versions of these devices have allowed Gemmell and many others to live active and productive lives.

LVADs of the Past

The earliest LVADs were large and limited to people who had a large enough body to accommodate the device. In some cases, the LVADs were designed only for hospital use, which meant people had to remain in the hospital while on support. Others had a portable version that allowed them to go home, but it was still inconvenient.

“The batteries were good for about four hours, so they required a lot of changing and recharging the batteries,” says Douglas Horstmanshof, M.D., co-director of Integris Advanced Cardiac Care in Oklahoma City, Oklahoma. The devices also only lasted about 18 months. “They were originally engineered to get people through transplant therapy, which might take a year or two to find a heart, so they were not designed with longterm support in mind,” Dr. Horstmanshof says. And, while they helped extend the lives of patients who used them, the outlook wasn’t great: The two-year survival rate with the original LVAD was only about 25%.

LVADs have improved significantly over time. They are now small and lightweight, making them suitable for smaller people, and nearly all patients are able to return home following an implant. There are also more options.

Some of the LVADs available in the U.S. include the HeartMate II LVAD and Heart- Mate 3 LVAD by Abbott, Medtronic’s HeartWare HVAD System, the SynCardia Total Artificial Heart, and the Berlin Heart EXCOR Adult and EXCOR Pediatric. Advancements also have reduced potential side effects. Whenever metal comes in contact with blood, a person is at risk for clots, Dr. Horstmanshof says.

“The newest pump, the HeartMate 3, has been engineered specifically to try to dramatically reduce those clots, and it has been shown to be very successful in clinical trials,” he says. LVADs last longer now, too. They don’t just provide short-term support for people who are waiting for a donor heart, called “Bridgeto- Transplant.” They can be installed as a permanent solution, called “Destination Therapy,” for people who are ineligible or choose not to get a heart transplant.

Longer durability means even if someone has a 10-year-old LVAD, as long as it’s working with no problems, there’s no need to replace it with a newer version, Dr. Horstmanshof says. To date, more than 26,600 patients have been implanted with the HeartMate II LVAD; more than 100 of those patients have had the device longer than 10 years. In addition, the survival rate is much higher for the latest generation LVADs. In clinical trials, the HeartMate 3 LVAD had an 83% percent survival rate at two years, which is essentially the same as the survival rate for heart transplants.

LVADs don’t just extend quantity of life; they improve the recipients’ quality of life. Wade Palmer, 58, of Atlanta, Georgia, was born with several heart conditions, including a complete heart block. He was diagnosed with end-stage heart failure in 2012. “It was a very critical time and we didn’t have time to wait on [a heart transplant],” Palmer says.

His only choice was to get an LVAD, and he’s glad he did. “I feel I can do 95% of what I want to do,” he says. “I am currently disabled, but I keep the house, I cook, I do yard work, I garden and I go all over the metro Atlanta area talking with patients about heart disease,” says Palmer, a member of Mended Hearts Chapter 416 of Piedmont Atlanta, Georgia. He also goes to the gym three times a week. Gemmell, too, is happy with his LVAD. He works full time, and, since the LVAD was implanted, he has married and has an almost 3-year-old son.

He and his family also travel frequently, and he volunteers as a member of Mended Little Hearts of Syracuse. Of course, that’s not to say life with an LVAD is perfect. “You have to adjust to living with a very wired fanny pack strapped to you all the time,” Gemmell says.

Wearers must be careful not to get the wires caught on objects and taking a shower can be tricky. “You can’t get the equipment wet, so you have to get everything into a tiny water-resistant bag and wear it in the shower, which can be awkward,” Gemmell says.An LVAD also has risks like stroke, infection and, rarely, malfunction of the device.

Still, Gemmell says the benefits far outweigh the risks. “Back in 1986, doctors didn’t expect me to live past three or four years old,” he says. “I’m 32 and still here, and it’s all because of advances in medicine and technology, such as the LVAD.”