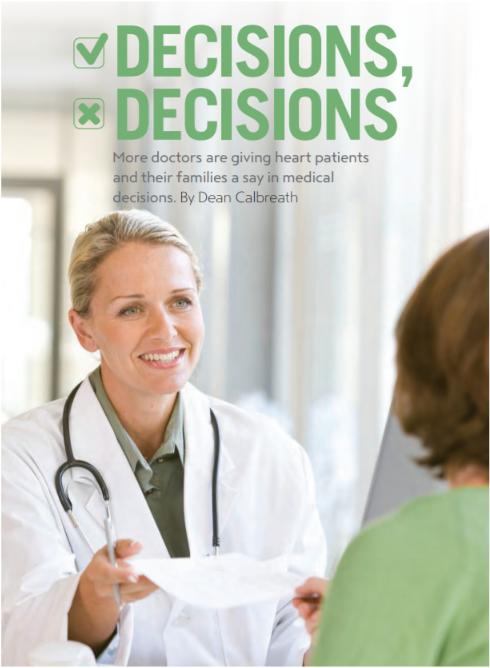 A quiet revolution has been taking place in American hospitals in recent years, as patients are demanding more of a say over their medical treatment rather than relying solely on the pronouncements of their doctors.

Although the move toward giving patients a greater voice in their care has been around since at least the early 1980s, it has grown stronger recently thanks partly to the explosion of medical information on the Internet, from sites like FamilyDoctor.org, WebMD. com, KidsHealth.com or the Mayo Clinic’s Shared Decision-Making National Resource Center, as well as the rise of a new generation of doctors who see value in having their patients more actively involved in managing their health.

With the continuing rollout of the Affordable Care Act, the idea of shared decision-making is likely to advance even further. The act not only establishes a program to give Medicare patients more input on medical decisions, but also offers funding to help hospitals provide patients with as much information as they need about medical tests and treatments, including their effectiveness and cost.

Not all doctors have embraced the concept. Some fear that patients “lack the capacity or ability” to decide on medical procedures, which could result in “bad decisions,” according to a 2012 report in the Journal of General Internal Medicine. But there’s no evidence that those fears are justified. Instead, patients who are drawn into the decision-making process are generally more satisfied with the outcome, according to a report last year by the Cochrane Library of medical information.

A Sense of Control

Josh Koch, M.D., medical director of cardiology at Children’s Health at UT Southwestern Medical Center in Dallas, says that sharing the decision-making helps relieve the stress of patients and their family members as they go through surgery.

“One of the biggest stressors that patients face is their loss of control,” Dr. Koch says. “Giving them more control over what they’re going through — even if over relatively minor issues — helps relieve that stress. And once the procedure is over, they feel a sense of pride and ownership over what they accomplished, which makes it more likely that they’ll be more active in whatever follow-up care is needed.”

For decisions where Dr. Koch thinks there is only one feasible course of action, he steers patients down that path by giving them all the appropriate information. “Things work much better when everyone’s on the same page, working from the same base of knowledge,” he says.

But many medical decisions are a coin toss between equally viable or equally risky options. In those cases, Dr. Koch gives patients a greater voice in the ultimate decision. In one case, when he and his medical team were trying to decide when to take a young child off a breathing machine, he asked the mother to join in the discussions, which lasted for days. There were pluses and minuses to leaving the boy on the machine, so Dr. Koch waited until there was a broad consensus — including the mother — about when to remove his tube.

As it turned out, the boy took a turn for the worse after they removed the tube, so they put it back in until the boy gained more strength. “But in our discussions, we had talked about that possibility, so the mother was prepared,” he says. “She thanked us for letting her be a part of those discussions and for letting her help decide when to do it. I can’t understate how important it is to let families have input in their children’s care.”

A Sense of Confidence

Former journalist Bob Holland’s experience in shared decision-making began during a checkup in 2004, when he learned that the aortic valve of his heart was leaking and that his aortic root was dangerously enlarged, meaning that both would have to be replaced.

Holland — who was living in Northern Virginia at the time and is now a member of Mended Hearts Chapter 117 in Myrtle Beach, S.C. — was referred to Alan Speir, M.D., one of the top heart surgeons in the region. (Dr. Speir would later make headlines by transplanting the heart of former-Vice President Dick Cheney in 2012.)

Holland says that from the first time he saw Speir, working out of Inova Hospital in Fairfax, Va., he drew him into the decision-making process. “For instance, he very carefully and thoroughly discussed all the pros and cons of mechanical and tissue valves, showing me some samples and inviting me to mull over the options before letting him know my decision.”

With Speir’s encouragement, Holland joined an online forum, valvereplacement. org, where he engaged in extensive discussions until finally deciding on a valve made from porcine or bovine tissue. Through his independent research, Holland also learned of a fairly new aortic root-and-valve replacement from Medtronic, which Speir and his surgical staff said would be an excellent choice. They replaced his root and valve in a February 2005 surgery, and it has functioned well ever since.

“I was confident that if I had made a dubious choice, Dr. Speir would have steered me toward a better option,” he says.

“I was confident that if I had made a dubious choice, Dr. Speir would have steered me toward a better option.” — Holland, Chapter 117

‘Have You Been Googling Again?’ 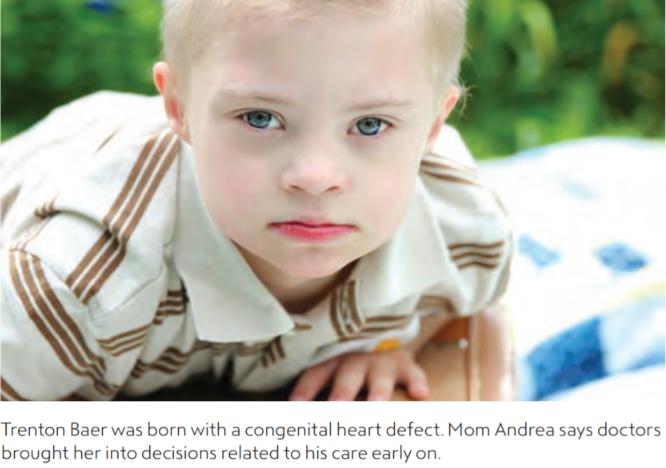 when doctors at Children’s Hospital in Pittsburgh discovered that her newborn son Trenton had congenital heart disease and would need open-heart surgery within the next couple months in order to survive. Andrea was floored when she heard the news, but she says she was also very lucky, because the doctors and surgeons immediately brought her into the decision-making process.

“We had long and open conversations with them about all the treatments that were available. They would ask what we thought of them,” Baer says. “Especially when there were elective choices, they would ask which we thought was the best.”

At first, the information seemed overwhelming. But with nearly three months between Trenton’s birth and the date of the surgery, Andrea delved deep into researching the topic, so she could be as knowledgeable as possible when discussing the operation with the medical team. “They would ask me sometimes, ‘Have you been Googling again?’”

As the date of the surgery arrived, 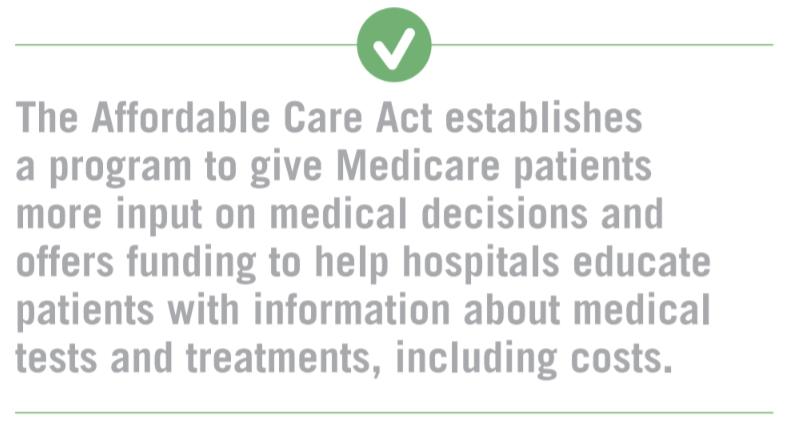 she felt prepared for what to expect — and she wasn’t disappointed. Trenton did well and he’s now a happy, healthy 6-year-old boy. “At some point in time, he’ll need open heart surgery again, but you never know when. It could be this year or it could be when he’s 25. It’s a waiting game.”

Nevertheless, Baer says the process could have been better. She was caught off-guard when Trenton had complications from his heart surgery not long after getting back from the hospital. “If I had known how common that was, I would not have been so worried,” she said.

Her main project this year is distributing the Mended Little HeartGuide, a resource guide outlining what parents can expect from their children’s surgery and its aftermath as well as what kinds of questions they should ask along the way. Although the guide is specifically aimed at parents of children with congenital heart disease, its advice is good for anyone engaging in shared decision-making: “Educate yourself via reliable sources… Work with (the) doctor… Learn about your hospital….” and perhaps most of all “Do not be afraid to ask questions to make sure that your son or your daughter [or you, for that matter] is getting the best care for his or her condition.” 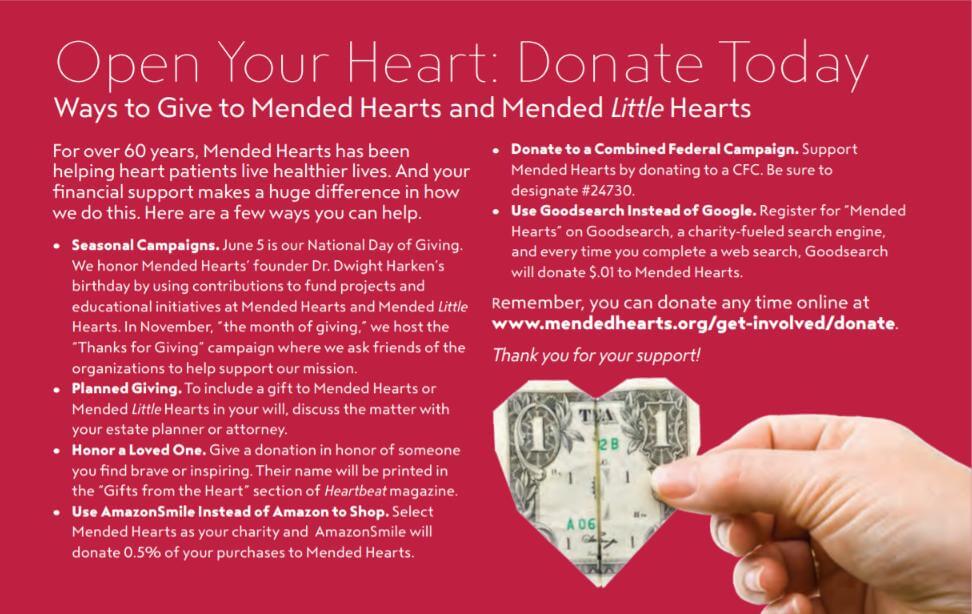