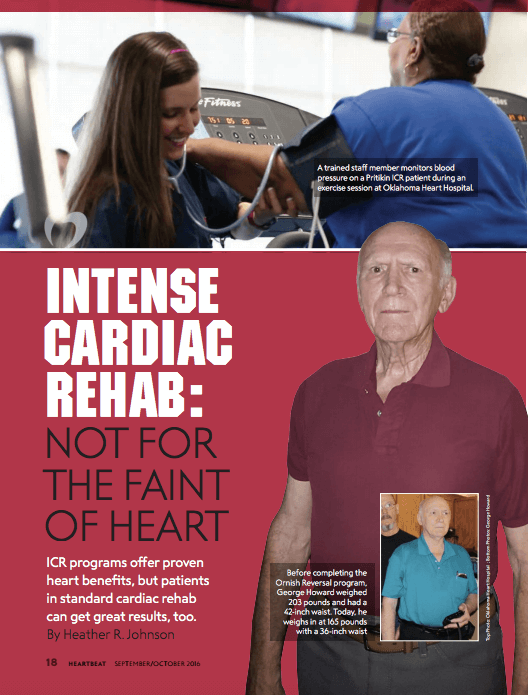 By 2015, his commitment to exercise and healthier eating had waned, and he found himself back in the hospital to have a stent placed inside another stent from 2006. At this point, he knew he needed a more aggressive cardiac care plan.

Upon completing the Ornish Program for Reversing Heart Disease — an intensive cardiac rehab program offered at the Texas Health Arlington Memorial Hospital in Arlington, Texas — Howard had lost 38 pounds. His doctors decreased most of his medications. His total cholesterol level, once in the 270s, had fallen below 100. Best of all, “I can mow the lawn without any trouble,” says Howard, a member of Mended Hearts Chapter 152 in Arlington, Texas. “I just spent four hours on the lake with my grandkids. I couldn’t do these things before.”

Intensive cardiac rehab worked for Howard, but it isn’t for everyone. Nor does it need to be.

Traditional cardiac rehab typically allows for 36 sessions (usually in two 1-hour sessions per day), and focuses on exercise with some instruction on non-exercise factors, such as diet and stress management. Intense cardiac rehab includes up to 72 sessions (as many as six sessions per day), and incorporates exercise and in-depth education about nutrition, stress management, meditation, and the relationship between lifestyle and heart health.

ICR programs began gaining traction in 2010 when legislation was passed that provided new parameters for standard cardiac rehab, essentially allowing for more than 36 sessions if the patient needed them, and also defined and outlined intensive cardiac rehab. At that time, the Centers for Medicare and Medicaid approved coverage for two ICR programs: the Pritikin ICR program and the Ornish Program for Reversing Heart Disease. (For a brief time, the Bensen-Henry Institute Cardiac Wellness Program was also Medicare-approved; however the program is no longer offered.)

For three to four hours a day, twice a week, for nine weeks, ICR patients exercise and learn how to live a healthy lifestyle. They learn how to cook hearthealthy meals, shop for healthy foods, and order wisely in restaurants. The comprehensive plan also helps patients quit smoking, manage stress, meditate, maintain positive personal and professional relationships, and adopt a positive mindset. At the end of nine weeks, patients are encouraged to attend regular support groups, which follow a similar format as the supervised sessions.

For Howard, who had previously tried to follow Ornish’s program on his own, the group support helped him stick with the program long term. “It’s a safe place to talk with like-minded people who have been through what you’ve been through,” says Howard. “We encourage each other to stay on the diet during times when we might get into trouble.”

With the exception of those with stable chronic heart failure, anyone who is eligible for traditional cardiac rehab can participate in ICR. Again, for those willing to make serious lifestyle changes, and have time to attend the outpatient sessions, ICR offers benefits.

Brenda Doughty, cardiac rehab manager for Texas Health Arlington Memorial Hospital, has seen impressive benefits among the hospital’s ICR participants, including a 72% reduction in depression scores. Exercise capacity improved by more than 60%. And time devoted to stress management increased by 50%.

“We also saw phenomenal weight loss,” she says. “Patients decreased their blood pressure medication and some of the diabetics reduced or got off insulin entirely. It’s so rewarding to see people make those changes in only nine weeks.”

Texas Health Arlington Memorial already offered traditional cardiac rehab, but added ICR to give patients one more tool to improve heart health, quality of life and well-being. “Research has shown that education, stress management, and group support, in addition to monitored exercise, when adhered to over a long period of time, can reverse heart disease,” Dougherty says.

Centered on the Patient’s Needs

“[ICR programs] work, and I think if one has the time and the information to get that more intensive involvement, then that’s a good thing,” says Richard Josephson, M.D., a cardiologist at University Hospitals Case Medical Center in Cleveland, Ohio. However, he adds, “I don’t think that anyone should feel cheated that they’re somehow getting substandard care because they’re in a standard cardiac rehab program.”

He also says that whether a cardiac rehab program is intensive or standard, it should be as tailored to an individual patient as possible, though that’s not always the case. “Just like schools, just like restaurants, just like everything else — the resources, the size, the scope, and arguably, potentially the quality — of cardiac rehab programs differ.

Is ICR Really Better Than Standard?

In addition to meeting the eligibility criteria from Medicare or private insurer, heart patients need to be willing to make an intense commitment for nine weeks and beyond. “Patients need to embrace the [longer] sessions and the diet,” Dr. Josephson says. “If you have a patient who says, ‘I’ve been eating the same way my whole life and I’m not going to change,’ they’re not a good candidate for ICR.”

“We encourage all heart patients to do one or the other,” says Dougherty. “Our message is to participate in cardiac rehab. Whether you choose traditional or intensive can be your choice — just get into rehab.”

Intense Cardiac Rehab: Not for the Faint of Heart