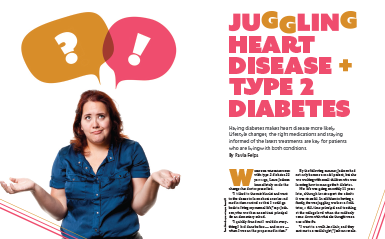 When she was diagnosed with type 2 diabetes 22 years ago, Laura Jackson immediately made the changes her doctor prescribed.

“I talked to the nutritionist and went to the classes to learn about exercise and medication control so that I could go back to living my normal life,” says Jackson, who was then an assistant principal for an elementary school.

“I quickly found out I could do everything I had done before — and more — when I was on the proper medication.”

By the following summer, Jackson had not only become a model patient, but she was working with small children who were learning how to manage their diabetes.

Her life was going smoothly 11 years later, although in retrospect she admits it was stressful. In addition to having a family, she was juggling work as a facilitator, a full-time principal and teaching at the college level when she suddenly came down with what she thought was a case of the flu.

“I went to a walk-in clinic, and they sent me to a cardiologist,” Jackson recalls. “And within three weeks, I was having open-heart surgery.”

Today, Jackson has had to learn how to juggle diabetes and heart disease. That means she’s learned to monitor her own health closely. She works in concert with her doctors to manage both conditions, and keeps her medication information organized and up to date. She also has become Vice President of Chapter 127 of Mended Hearts in Cookeville, Tennessee, and visits patients to talk with them about their diagnosis and encourage them on their journey.

“My husband works with family members about how to deal with heart disease, and I work with the patients. That’s my passion now — to spread the word, get it out and let people know what they can do.”

Although the discovery of her heart disease caught Jackson off guard, she is one of millions of Americans who will develop cardiovascular disease after being diagnosed with type 2 diabetes.

In fact, according to the American Heart Association, diabetes is one of seven major controllable risk factors for developing heart disease. And Prakash Deedwania, M.D., professor of medicine at the University of California San Francisco and co-chair of the American Heart Association Diabetes Committee, says that diabetes is often one of the early warning signs of future cardiovascular complications.

“Seventy to eighty percent of these people will die of heart disease, not of diabetes,” he says.

The key is in making lasting changes and for patients to learn how medications they are taking for one condition will affect the other condition.

“All of the medicines that we used to use primarily for diabetes primarily control glucose, but that can have an adverse effect on the heart,” Dr. Deedwania says. “Insulin does not provide protection against heart disease, so even though it may be helpful in treating diabetes, it can cause weight gain.”

But the news isn’t all bad; metaformin, which is distributed under such brand names as Glumetza, Glucophage, Fortamet, Riomet and Glucophage XR, is the oldest diabetes drug, and it has several advantages for patients, according to Deedwania. These include helping patients lose weight and control their blood glucose.

In recent years, more attention has been given to the medications used for diabetes treatment and their contraindications for people with heart disease. That has resulted in many new and effective medications that are shown to reduce the risk of heart disease and heart failure in patients with diabetes.

“There are so many new medications coming out that even the doctors can’t keep up with them,” Dr. Deedwania says. This means that patients must do more self-educating and self-advocating, and ask more questions. “Ask if [your diabetes] medicine is going to reduce, and not increase, the risk of heart problems,” he advises. “Ask for Photos: Courtesy of Laura Jackson protective medicines for the heart.”

Two types of medications bringing hope to patients with both diabetes and heart disease are SGLT2 inhibitors and GLP1 agonists.

SGLT2, or sodium-glucose co-transporter 2, medications inhibit reabsorption of glucose in the kidney, which helps lower blood sugar. They are marketed under such names as Jardiance, Invokana and Forxiga.

The GLP-1 agonists, or glucagon-like peptide-1 receptor agonists, “help the body release insulin in the proper way and format,” according to Dr. Deedwania, and have beneficial effects on controlling heart disease and diabetes, as well as having other benefits related to problems such as high blood pressure. They are sold under the names Victoza, Trulicity and Bydureon, among others.

“These are good, but expensive,” Dr. Deedwania says, adding that he expects to see many more rapid changes in the field of diabetes management in the next few years.

“Diabetes is the biggest changing disease in the medical field — in a positive way,” he says. “Doctors are beginning to realize they need to be as educated in diabetes as they are in cardiovascular issues.”

As important a role as medication plays in the management of heart disease and diabetes, Dr. Deedwania is quick to point out that diabetes is a lifestyle disease, and part of treating it means making permanent changes to your habits.

When Jackson was first diagnosed with diabetes she learned how to better approach nutrition, cutting out fatty foods and carbonated beverages and reacquainting herself with the joy of eating the fresh vegetables that she grew up loving. Instead of sodas, she now squeezes lemon into her water and is surprised at how good the changes taste and how well they make her feel.

Dr. Deedwania says that restructuring bad lifestyle habits is crucial for good health, with exercise and diet topping the list. Eliminating sugar and unhealthy fats and switching to a fresh, healthy diet is as important as a glucose-centric approach to diabetes management, he says.

“I know patients who are on the edge of developing diabetes who lost 10 to 15 pounds, and they returned to normal,” the doctor says. “I cannot emphasize this enough: the quality of life you get with lifestyle changes is so much better than what you get with medication. You not only reduce your glucose, but your arteries are healthy, your psyche improves, your mobility improves and your longevity improves. You cannot get those same kind of results with medication.”