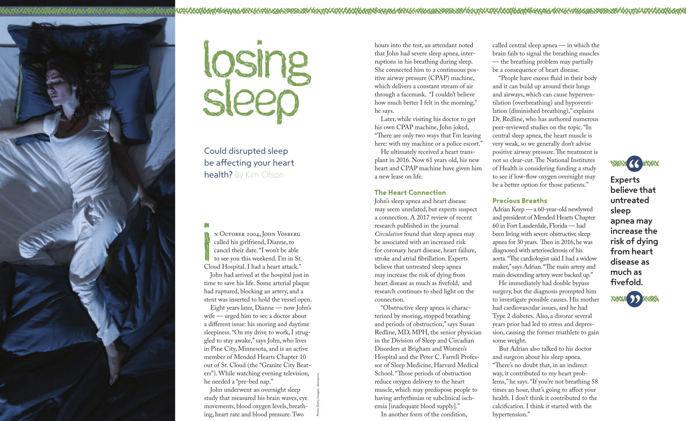 In October 2004, John Vosberg called his girlfriend, Dianne, to cancel their date. “I won’t be able to see you this weekend. I’m in St. Cloud Hospital. I had a heart attack.”

John had arrived at the hospital just in time to save his life. Some arterial plaque had ruptured, blocking an artery, and a stent was inserted to hold the vessel open.

Eight years later, Dianne — now John’s wife — urged him to see a doctor about a different issue: his snoring and daytime sleepiness. “On my drive to work, I struggled to stay awake,” says John, who lives in Pine City, Minnesota, and is an active member of Mended Hearts Chapter 10 out of St. Cloud (the “Granite City Beaters”). While watching evening television, he needed a “pre-bed nap.”

John underwent an overnight sleep study that measured his brain waves, eye movements, blood oxygen levels, breathing, heart rate and blood pressure. Two hours into the test, an attendant noted that John had severe sleep apnea, interruptions in his breathing during sleep. She connected him to a continuous positive airway pressure (CPAP) machine, which delivers a constant stream of air through a facemask. “I couldn’t believe how much better I felt in the morning,” he says.

Later, while visiting his doctor to get his own CPAP machine, John joked, “There are only two ways that I’m leaving here: with my machine or a police escort.”

He ultimately received a heart transplant in 2016. Now 61 years old, his new heart and CPAP machine have given him a new lease on life.

John’s sleep apnea and heart disease may seem unrelated, but experts suspect a connection. A 2017 review of recent research published in the journal Circulation found that sleep apnea may be associated with an increased risk for coronary heart disease, heart failure, stroke and atrial fibrillation. Experts believe that untreated sleep apnea may increase the risk of dying from heart disease as much as fivefold, and research continues to shed light on the connection.

“Obstructive sleep apnea is characterized by snoring, stopped breathing and periods of obstruction,” says Susan Redline, MD, MPH, the senior physician in the Division of Sleep and Circadian Disorders at Brigham and Women’s Hospital and the Peter C. Farrell Professor of Sleep Medicine, Harvard Medical School. “Those periods of obstruction reduce oxygen delivery to the heart muscle, which may predispose people to having arrhythmias or subclinical ischemia [inadequate blood supply].”

In another form of the condition, called central sleep apnea — in which the brain fails to signal the breathing muscles — the breathing problem may partially be a consequence of heart disease.

“People have excess fluid in their body and it can build up around their lungs and airways, which can cause hyperventilation (overbreathing) and hypoventilation (diminished breathing),” explains Dr. Redline, who has authored numerous peer-reviewed studies on the topic. “In central sleep apnea, the heart muscle is very weak, so we generally don’t advise positive airway pressure. The treatment is not so clear-cut. The National Institutes of Health is considering funding a study to see if low-flow oxygen overnight may be a better option for those patients.”

Adrian Keep — a 60-year-old newlywed and president of Mended Hearts Chapter 60 in Fort Lauderdale, Florida — had been living with severe obstructive sleep apnea for 30 years. Then in 2016, he was diagnosed with arteriosclerosis of his aorta. “The cardiologist said I had a widow maker,” says Adrian. “The main artery and main descending artery were backed up.”

He immediately had double bypass surgery, but the diagnosis prompted him to investigate possible causes. His mother had cardiovascular issues, and he had Type 2 diabetes. Also, a divorce several years prior had led to stress and depression, causing the former triathlete to gain some weight.

But Adrian also talked to his doctor and surgeon about his sleep apnea.

“There’s no doubt that, in an indirect way, it contributed to my heart problems,” he says. “If you’re not breathing 58 times an hour, that’s going to affect your health. I don’t think it contributed to the calcification. I think it started with the hypertension.”

The specific value of the CPAP machine for those with sleep apnea is still being investigated. One trial, the Sleep Apnea Cardiovascular Endpoints (SAVE) study, enrolled 2,700 patients from 89 hospitals in seven countries who had moderate to severe sleep apnea and had previously had a heart attack or stroke. While those using a CPAP machine experienced less depression and sleepiness, there was no reduction in the number of heart attacks, strokes or hospital admissions for cardiovascular events.

“One of the limitations of CPAP treatment for sleep apnea is that not every patient can successfully use the therapy,” says Doug McEvoy, M.D., of Flinders University of South Australia, the study’s principal investigator. “We found in the study that average use of the treatment at night was just 3.3 hours.” There was evidence, however, that patients who could use the CPAP for more than four hours a night appeared to have a reduced risk of stroke.

Ed Marrone, a physically active 68-year-old living in Southern California, had to experiment and make adjustments to his CPAP machine, but the former electrical engineer and DIY enthusiast was up to the task.

Five years ago, Ed, who is a member of Mended Hearts Chapter 62 (San Diego), was on a wakeboarding trip with his son at Lake Mead. While in the water, he had a frightening and sudden loss of his breath and body strength. The incident nearly claimed his life. The culprit was degenerative mitral valve disease, and during pre-testing for his valve repair surgery at the Cleveland Clinic, he was also diagnosed with mild coronary artery disease.

Around that time, his sleep apnea symptoms had been worsening. “I was waking up choking and feeling like I was suffocating, sometimes multiple times a night,” he says. His doctor thought he wouldn’t like the CPAP mask, however, so he wasn’t treated. (Some research indicates that sleep apnea, which increases pressure within the aorta, may compromise the mitral valve over time.)

Although Ed’s sleep apnea symptoms lessened following valve surgery, he was determined to address it. He got a new primary care physician and a new cardiologist and a CPAP machine, but he still needed naps. Because of his continued sleepiness, he was given an auto-adjusting CPAP machine, which adjusts air pressure as needed with each breath. “It reports detailed info about your breathing during the night and puts it on an SD card,” Ed says.

Using free open-source software, he’s been able to assess patterns and better calibrate the air pressure. “I feel so much better,” he says. “I feel more alert. I wish I’d had the machine while I was working.”

Signs of sleep apnea include loud snoring, gasping or choking while sleeping, abrupt awakening during the night, fatigue or extreme daytime sleepiness, insomnia and a frequently dry or sore throat. If you think you may be suffering from sleep apnea, don’t ignore the signs.

There are several ways to reduce your symptoms. Those who cannot use a CPAP machine may benefit from a custom mouthpiece that opens the upper airway. In some cases, medication can be prescribed. Lifestyle changes, such as losing excess weight or eliminating alcohol, may also help.

“The stress of not getting one’s rest definitely takes a toll on one’s body,” says John Vosberg. “I truly believe I wouldn’t be here now if I didn’t have this (CPAP) machine. If someone’s a loud snorer, if they don’t have a lot of energy, they should do the sleep study. You’ll get better rest, you’ll have more energy, and it could save your life.”

Sleep apnea patients have valuable data and insights to share about their condition, and researchers are eager to learn from them. The Sleep Apnea Patient Centered Outcomes Network (SAPCON) — a collaboration of the American Sleep Association and research and clinical partners — is recruiting 50,000 people with sleep apnea. These individuals will become a patient-powered national health data network that links patients, health care providers and researchers to help further our understanding of sleep apnea.

“We’ve enrolled 12,000 people who complete online surveys, which have given us information about delays in diagnoses, symptoms people experience, and satisfaction with different treatments and interventions,” says Dr. Susan Redline, the principal investigator. “It’s made me more aware of the challenges that patients face in getting adequately diagnosed, and the value in providing peer-to-peer support as they make changes.”

Within the network is a group of patient leaders who work on specific initiatives. Some, for example, have worked on developing a women’s sleep apnea fact sheet, because women don’t always feel that they fit the typical patient model.

Join us on June 21st at 8:00 pm ET for ... Representing MHI- Speaker Training! You will learn how to tell your MHI story but with your own twist.

Meet your 2021-2023 officers! On June 28, we'll install the new officers after our annual meeting. Be sure to join us. The meeting starts at 6 p.m. ET and you can register now! #MLH #AnnualMeeting #Support http://ow.ly/TEQn50EYqwz