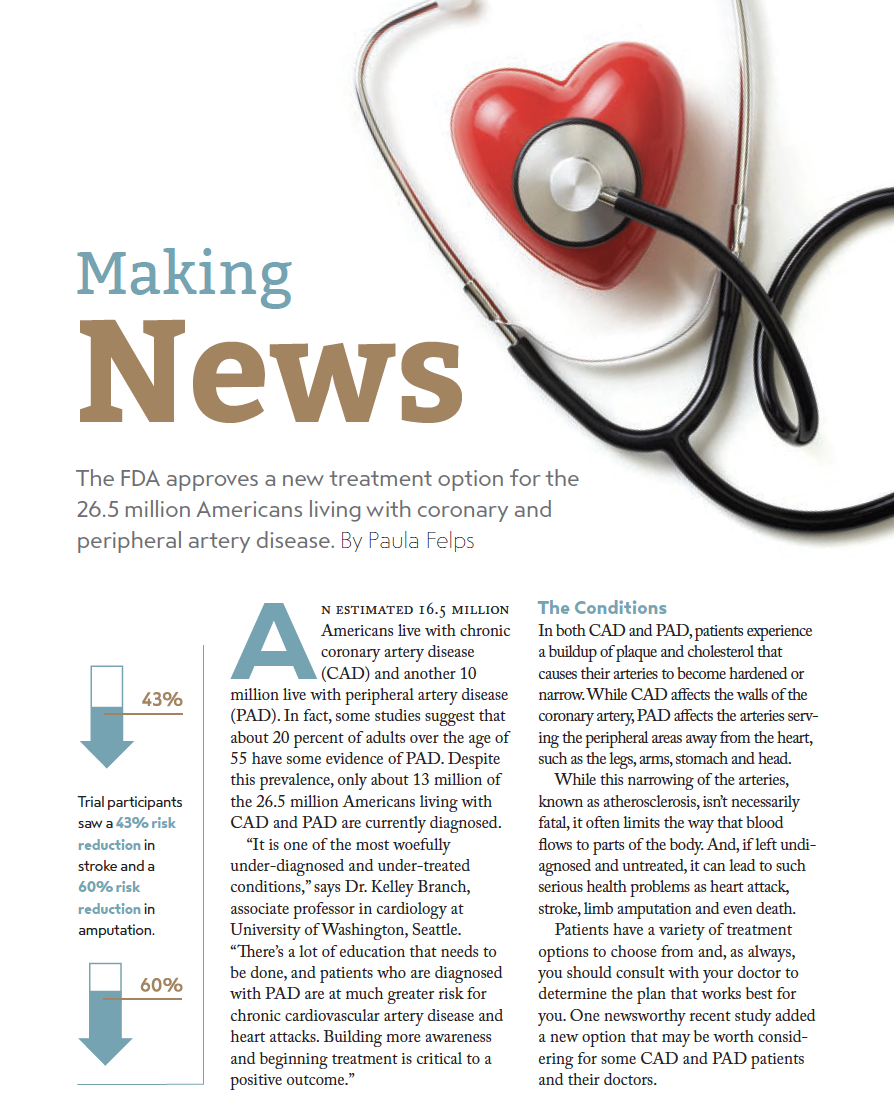 An estimated 16.5 million Americans live with chronic coronary artery disease (CAD) and another 10 million live with peripheral artery disease (PAD). In fact, some studies suggest that about 20 percent of adults over the age of 55 have some evidence of PAD. Despite this prevalence, only about 13 million of the 26.5 million Americans living with CAD and PAD are currently diagnosed.

“It is one of the most woefully under-diagnosed and under-treated conditions,” says Dr. Kelley Branch, associate professor in cardiology at University of Washington, Seattle.

“There’s a lot of education that needs to be done, and patients who are diagnosed with PAD are at much greater risk for chronic cardiovascular artery disease and heart attacks. Building more awareness and beginning treatment is critical to a positive outcome.”

In both CAD and PAD, patients experience a buildup of plaque and cholesterol that causes their arteries to become hardened or narrow. While CAD affects the walls of the coronary artery, PAD affects the arteries serving the peripheral areas away from the heart, such as the legs, arms, stomach and head.

While this narrowing of the arteries, known as atherosclerosis, isn’t necessarily fatal, it often limits the way that blood flows to parts of the body. And, if left undiagnosed and untreated, it can lead to such serious health problems as heart attack, stroke, limb amputation and even death.

Patients have a variety of treatment options to choose from and, as always, you should consult with your doctor to determine the plan that works best for you. One newsworthy recent study added a new option that may be worth considering for some CAD and PAD patients and their doctors.

“Most people with stable CAD and PAD are [currently] treated with aspirin and a small percentage receive P2Y12 monotherapy,” says Dr. Paul Burton, vice president of medical affairs for Janssen, which conducted the trial with Bayer and the Population Health Research Institute. “Yet despite the use of preventative guideline-directed medicines, up to 5% of people with stable CAD or PAD will still experience a debilitating or fatal cardiovascular event each year.”

Because of these statistics, researchers set out to determine whether combining Xarelto with aspirin would reduce cardiovascular events and related outcomes in these patients when com- pared to either option on its own.

The trial, called COMPASS (Cardiovascular Outcomes for People Using Anticoagulation Strategies), was a Phase 3 clinical study that involved 27,395 patients from 33 countries. It was halted several months early by an Independent Data Monitoring Committee after the combination — aspirin plus Xarelto (rivaroxaban) as a daily regimen — indicated a 24% reduction in the risk of major cardiovascular events.

“It is rare for a clinical trial to be stopped early for overwhelming efficacy as was recommended for the COMPASS Trial,” says Burton.

Branch says the biggest surprise for those participating in the study was how quickly they saw a reduction in cardiovascular events. “It was a shock, because the results were even more robust than expected,” Branch says. “One of the things we saw  was that the risk for two of the worst out- comes —stroke and amputation — both were significantly reduced.”

In a review for the American College of Cardiology, Dr. Subhash Banerjee, professor in the UT Southwestern Department of Internal Medicine, notes that the COMPASS trial provided “an important milestone in our search for an effective secondary prevention strategy for patients with cardiovascular disease.”

Branch adds, “This is an exciting time, with new medications and a new way of treating patients more effectively. We finally have a medication that is not too much and not too little when it comes to treating thrombosis events. And it’s something that is improving not just  the quality of life for patients but can improve the quantity of life as well.”

In October, Janssen Pharmaceutical Companies of Johnson & Johnson announced that it had received FDA approval on Xarelto for the reduction of myocardial infarction and stroke in people living with chronic CAD and PAD. Outreach is underway to major medical facilities and organizations to increase doctors’ knowledge of the study’s results.

“Like many treatments, it will take a while for people to become aware of it and know when to use it,” says Branch. “We expect to see it being used for PAD patients first; they’re most in need and have been waiting a couple of decades for something like this.”

CAD and PAD patients may want to consider discussing this new treatment option with their doctors to find out if it could benefit them. 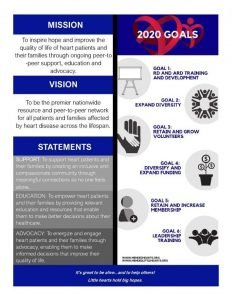