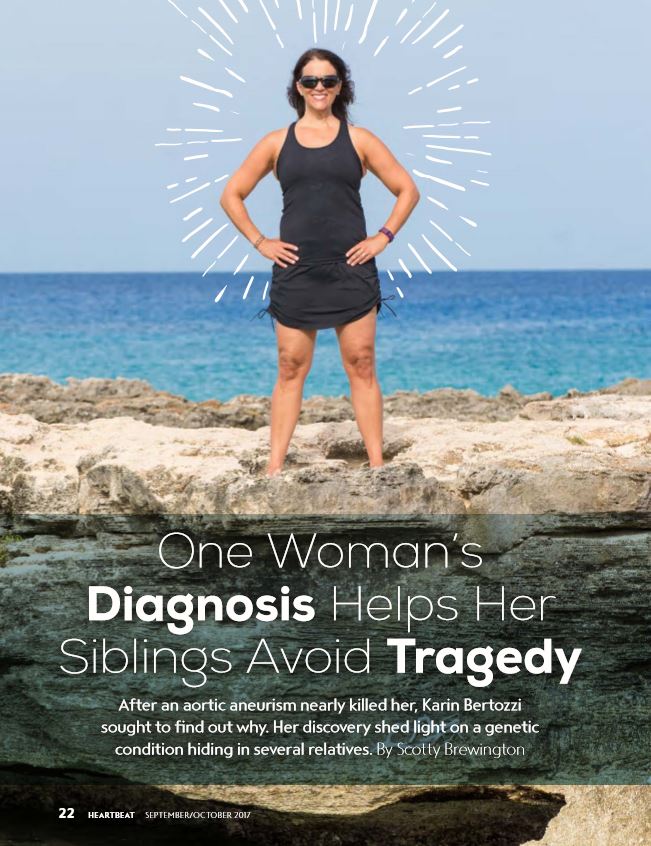 At the age of just 46, Karin Bertozzi, a yoga instructor and fit mother of three, fainted in the middle of her local grocery store. That’s the last thing she remembers until four days later.

Just after she fainted, Bertozzi was rushed by ambulance to Suburban Hospital in Bethesday, Maryland, where medical staff originally suspected a stroke. Very quickly, though, she was diagnosed with an ascending aortic aneurysm with a dissection measuring 5 centimeters. It was about to rupture, which likely would have killed her.

For 18 days, she remained in the intensive care unit, where she fought several complications: blood clots, heart rhythm problems and even a MRSA scare (MRSA is a drug-resistant bacterial infection). During that time, she also began having heart-rhythm issues, so doctors performed another surgery to implant a dual-chamber pacemaker.

“When I finally woke up, I thought I had been in a car accident,” says Bertozzi. “When my husband and surgeon said I had open heart surgery, I didn’t believe them. For me, there were no warning signs. I had always been athletic. I had taught two yoga classes that morning — and never had high blood pressure or high cholesterol. I had done everything right.”

What Is an Aortic Aneurysm?

The aorta is the largest artery in the body. It begins in the left ventricle of the heart and descends all the way down into the abdomen.

An aneurysm is caused by a weakness in the aorta, which causes the aortic walls to bulge out. When an aneurysm causes a tear in the aortic wall, it’s called a dissection. If this bursts, it can lead to uncontrolled bleeding and death. When the aneurysm occurs in the portion of the heart that rises up out of ventricle, it is called an aortic aneurysm. If this happens toward the abdominal area, it’s called an abdominal aortic aneurysm.

Most aneurysms occur in 70- to 80-year-old men — not healthy, asymptomatic women in their 40s. To try and understand why this happened to her, Bertozzi worked with her doctors to examine her family history. She knew that her paternal grandfather had died in his sleep at age 52 of a cardiac event and that her father had suffered from an abdominal aneurysm before succumbing to cancer.

“I think my surgeon knew pretty early on that it had to be genetic. After my event, we started connecting the dots,” she says. Bertozzi was able to find her grandfather’s autopsy, which showed that he had died of the same type of aneurysm she had.

Her cardiac surgeon, Philip Corcoran, M.D., suspected that a genetic connective-tissue disorder might be to blame. He referred her to have genetic testing done at Johns Hopkins in Baltimore. She has since undergone genetic testing there, as well as through The John Ritter Foundation for Aortic Health (named after the actor who died suddenly of an acute aortic dissection) and at the University of Texas.

The results of genetic testing were inconclusive. Bertozzi did not test positive for one of the handful of “named” connective-tissue disorders. Instead, hers is one of the thousands of “unnamed” disorders, and therefore, there is not currently a specific gene that can be identified through genetic testing.

Since her aneurysm in October 2014, Bertozzi’s three older brothers, as well as her own three children, have been scanned for aneurysms with an echocardiogram. Two of Bertozzi’s brothers had aneurysms large enough that they required open-heart surgery. Her third brother also presented with a smaller aneurism that his doctors are monitoring.

Bertozzi’s children, as well as all of her nieces and nephews, are also scanned annually.

In total, all three of Bertozzi’s siblings and one uncle presented with a dilation of the aorta and signs of the same, unnamed genetic connective-tissue disorder.

“My family is unique in that we all have this and are all still alive, which makes us a unique grouping for geneticists to follow,” Bertozzi says. “I always joke with my doctors that once they are able to isolate the gene that causes the connective-tissue disease in our family, we should get to name it.”

According to Dr. Corcoran, there are certain types of syndromes that tend to run in families that can be associated with the familial propensity of developing weakness in the tissue walls of the aorta. The most common genetic connective-tissue disorder is Marfan Syndrome. (This is not the disorder that runs in Bertozzi’s family.)

Though inherited disorders like Bertozzi’s are uncommon, they can occur. The incidence of classic Marfan Syndrome, for example, is about one in 10,000. This means that approximately 200,000 people have this predisposition in the U.S.

Bertozzi’s disorder is even less common, but it’s still out there.

“I ask my patients, ‘Are your mom and dad alive and well? What about your sisters and brothers? If not, did they have known cardiovascular problems?’” Dr. Corcoran says. “These cardiac diseases tend to run in the family and need investigating. It’s important to know your family history.”

Investigating possible cardiac disease could be as simple as a chest X-ray, a CT scan of the chest or a non-invasive echocardiogram — all of which are relatively easy and cost-effective ways to look at the aorta, Dr. Corcoran says.

Bertozzi had the benefit of being close to the hospital, and EMS was able to respond rapidly. In cardiac situations, time is of the absolute essence, says Dr. Corcoran.

“Cardiac prognosis has dramatically improved in recent years. Back in the day, heart attacks had a close to 66% fatality rate,” he explains. “Now, if we can get the artery open in less than 90 minutes, we have a good chance of saving the patient. Every hour that passes with an undiagnosed condition like Karin’s, mortality rates can double.”

By being proactively screened, Bertozzi’s siblings were able to have elective surgery rather than suffer from a rupture and dissection of the aorta or other acute cardiac events, which ultimately caused the untimely deaths of John Ritter, Albert Einstein, Lucille Ball and Alan Thicke.

“Four members of Karin’s family were proactively screened and intervened upon, which hopefully saved their lives,” Dr. Corcoran says.

For Bertozzi, this life-changing heart event has served as a springboard for her to help others going through similar traumas. She remembers a Mended Hearts visitor named John, himself a heart patient 20 years earlier, who visited her every day while she was in the hospital.

“I was really touched by his dedication. He checked on me everyday,” she says. “My husband and Mom were there with me, but they were filled with so much worry. And the doctors and nurses are focused on saving your life. John was a quiet cheerleader, reminding me that I could do this. I could get my life back.”

Today, Bertozzi serves as a visitor and patient advocate with her local Mended Hearts chapter in Washington, D.C. She visits with patients at Suburban Hospital every Friday — sometimes more — after completing her daily cardiac rehab at the hospital.

“I’m in a community of other heart patients and I draw support from that. I wanted to give back to people in the same situation I had been in,” she says. “It’s one of the highlights of my week. When I stand in front of a heart patient, I have a story to tell. I can say I know what it feels like to be on these medications, what it feels like to sneeze for the first time with an incision.”

Bertozzi also has a message for everyone, even those outside of the heart community.

“I did all the right things — I ate right, exercised, didn’t smoke — but you just can’t escape your genetics,” she says. “If you know someone in your family has had a heart event, find out what it was. Being proactive is much better than being totally blindsided in the ICU and trying to wrap your brain around it. Become educated on your family history and be aware of your genetics. Knowledge is power!”

Snag your 2022 awareness campaign ... t-shirts now!! The Rock Your Scar photo contest is open now! Share Your Heart opens in February! Get your MHI swag now!

Snag your 2022 awareness campaign t-shirts now!! The Rock Your Scar photo contest is open now! Share Your Heart opens in February! Get your MHI swag now!