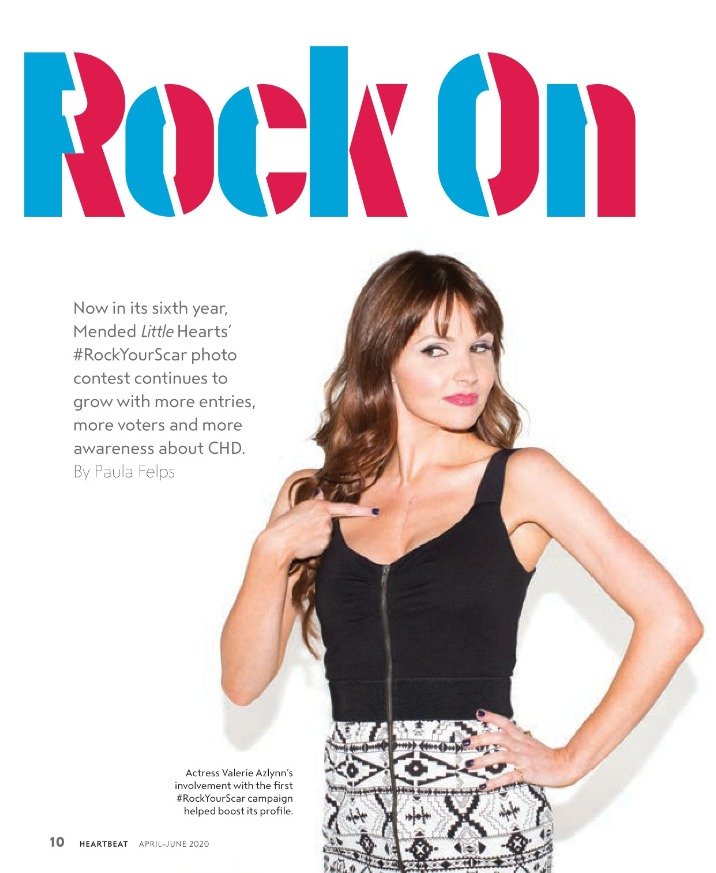 In 2014, the Mended LittLe Hearts Awareness Committee wanted to find a way to bring more attention to the prevalence of congenital heart disease (CHD). Lauren Gray, an adult with CHD, was the committee’s chair, and she began researching CHD awareness.

“At that time, there were no studies on CHD awareness in the U.S., but there was a study out of New Zealand that showed the single-most powerful image for CHD awareness was a scar on a child’s chest,” explains Jodi Smith, national program director for Mended Little Hearts. “That image made people realize that little kids have heart disease, too, but they’re born with it.”

Seeing the potential to raise awareness through such images, MLH built an entire campaign around the idea of patients showing their scars. They knew that heart warriors often felt ashamed and embarrassed by their scars and saw this as a way to change the narrative.

Calling it #RockYourScar, the team wanted to send a positive, uplifting message that scars aren’t something to be ashamed of; in fact, they show bravery and strength. Since they realized that not all scars are physical — some are the unseen scars people with CHD have on the inside —they decided that #RockYourScar would be open to anyone living with CHD who wanted to show how they embrace their CHD, scars and all, rather than being defined by it.

The campaign received a big boost when MLH connected with Valerie Azlynn, an actress who has appeared on both the small and big screens, and she agreed to share her story to help bring attention to the contest. Azlynn was born with an atrial septal defect, which required her to have open-heart surgery when she was just 13 years old.

“[She] had a very difficult time with her own scar, especially in the acting business, and wanted to empower girls so they didn’t feel ashamed like she did,” Smith explains. “She worked with us to develop this campaign, which started on Instagram to reach a much younger population — and the rest is history.”

In that first year, the contest drew nearly 500 entries, and each year has seen an uptick both in the number of entries and in the number of people voting. As the contest has grown, it has been shared by users on all social media platforms and is seen by thousands. This year, almost 1,200 photos were entered in the contest, which has eight age categories and one People’s Choice winner. While the winners in the age categories are determined by a panel of judges who also are professional photographers, the People’s Choice category is voted on by the general public. For #RockYourScar2020, more than 15,000 votes were cast for that winner — almost 3,000 votes more than last year’s People’s Choice winner received — and more than 200,000 votes were cast overall.

“I think that when people understand that #RockYourScar is not just a photo contest, but a national CHD awareness campaign, they want to participate,” Smith says. “People love looking at the pictures and reading the stories that go with them. I also think the emotion and empowerment behind the theme, Rock Your Scar, has a huge impact.”

She says that while it’s easy to get caught up in what children and adults can’t do because of CHD and how their condition limits them, many people with CHD show courage and resilience through difficult times in spite of it.

“Many of them are thriving and doing ‘normal’ kid and adult things with a determination and strength that we often don’t see in the average person,” Smith says. “They have overcome so much — including those who didn’t survive — and that should be honored, respected and shared.”

With the #RockYourScar photo contest and awareness campaign, heart warriors are encouraged to share their story with a single image, and Smith says that it can change the way they feel about having CHD and about their scars. It also has a dramatic effect on others.

“I love the difference this campaign has made in the lives of so many people,” she says. “I hear time and time again of kids, even little kids, who were ashamed of their scars before they became involved in this campaign. The emotional impact it has on kids and adults is huge.”

She has seen that impact firsthand through the eyes of her son, who is now 16. It’s important for him to see others who are openly showing their scars and exhibiting a sense of power and pride for what they’ve been through, and he loves looking at the pictures as she works on the slideshows. “

#RockYourScar is something they can look at and participate in that shows them they are not alone. It shows them that there are many people who happen to have CHD and are thriving, living their best lives.

“They say, ‘A picture is worth a thousand words,’ and #RockYourScar proves that is true.”