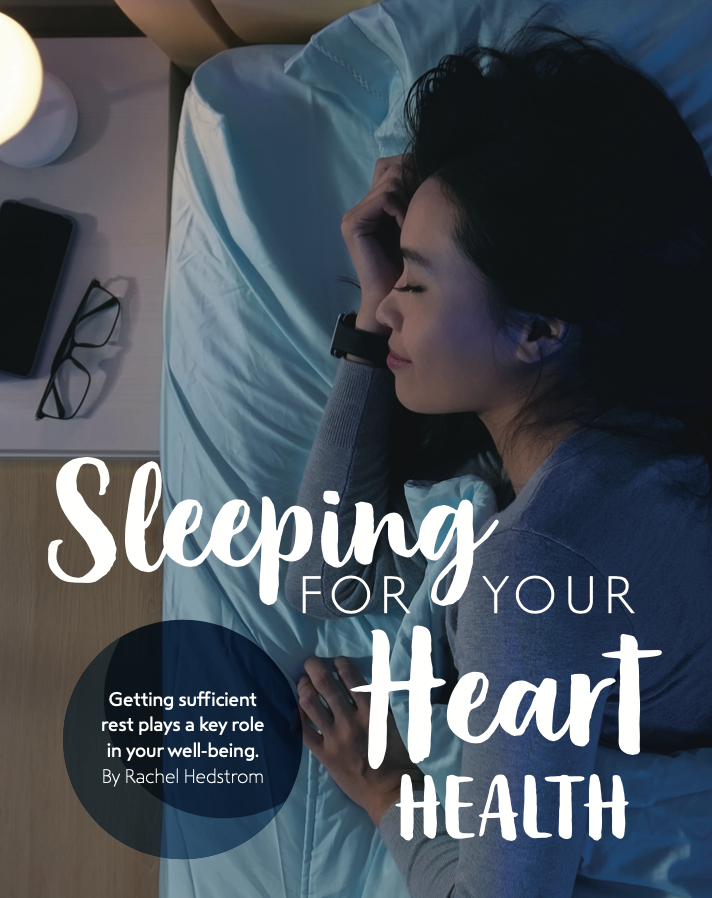 When Jeanne Miller wakes up at 3:25 a.m., a lot goes through her mind. “I just
go ahead and get up and read,” she says. “I know it’s so bad for me every time I see the hours of sleep I’m getting.”

Miller, a resident of Houston and a member of Mended Hearts Chapter 38, struggles with getting enough hours of restful sleep each night, even though she knows she needs it. “Mine has been a lifetime of sleeping three to five hours each night as an adult,” she admits.

Although the nights she spends awake may feel lonely, Miller is not alone in her sleep struggles. More than one-third of American adults are not getting enough sleep — classified as seven or more hours a day — on a regular basis, according to a study in the Centers for Disease Control and Prevention’s (CDC) Morbidity and Mortality Weekly Report, the first study to document estimates of self-reported healthy sleep duration for all 50 states and the District of Columbia.
And while more information continues surfacing about how little sleep most Americans are getting, the medical community is gaining a better understanding of how sleep affects heart health.

Effects of Sleep on the Body

“We’re starting to talk about it more, which captures the essence of where
we are right now with sleep,” says Nina Asrani, M.D., a cardiologist and member of the Texas Health Physicians Group. “We’re learning more and more about it, and about the effects of poor sleep and various sleep disorders and their effect on cardiovascular health.”

Sleep provides time for the body to restore and recharge, playing a key role in nearly all aspects of physical health. For the cardiovascular system, insufficient or fragmented sleep can contribute to problems with blood pressure and heighten the risk of heart disease, heart attacks, diabetes and stroke. In fact, a study published in Hypertension in 2006 showed that sleeping five hours or less almost doubled the risk of hypertension for people between the ages of 32 and 59.

Women appear to be more susceptible to the effects of abnormal sleep. Hypertension was more prevalent in women who slept five hours a night or less compared to those sleeping seven hours, a Whitehall II study found, although men had different results. In a Nurse’s Health Study of 71,617 women between the ages of 45 and 65, researchers found that individuals with a sleep duration of approximately five hours per night had a significantly higher 10-year risk for incident coronary heart disease compared with women who slept eight hours per night.

A higher vulnerability to the effects of abnormal sleep length has also been reported across ethnicities. Rates of hypertension are higher among Black people who sleep less than six hours per night compared to their white counter-parts. This data is in line with findings from the Coronary Artery Risk Development in Young Adults (CARDYA) study, where poor sleep duration was associated with greater blood pressure surges in African Americans.

The Danger of Sleep Apnea

Sleep apnea, a potentially serious sleep disorder in which breathing repeatedly stops and starts, is a large cause for concern, Dr. Asrani explains. “The most common conversation we’re having [with patients] is related to sleep apnea, because there is certainly a lot out there about its relationship to things like hypertension and even atrial fibrillation.”

Obstructive sleep apnea, or OSA, is a chronic disease in which the upper airway collapses during sleep. The American Academy of Sleep Medicine estimates that OSA affects nearly 30 million American adults, with an estimated 23.5 million of them currently undiagnosed. Although the specific connection is still unclear, untreated OSA has been linked to an increased risk for numerous health problems and is commonly found in people with cardiovascular disease.

It doesn’t take long for lack of sleep to leave a lasting mark, either. Research suggests it takes just one night for severe OSA to impair the body’s ability to regulate blood pressure. Between 30 and 40% of adults with high blood pressure also have OSA and, even with medications, severe OSA is still associated with poor blood pressure control. OSA also has been found in up to 85% of people with treatment-resistant hypertension, making it the most common secondary cause of this pervasive problem.

“When people get sent to us with an abnormal atrial fibrillation, irregular heartbeat, refractory high blood pressure or pulmonary hypertension, with a lot of those things, we can suspect that sleep apnea was related,” Dr. Asrani says.

The pauses in breathing at night brought on by sleep apnea put stress on the body, and the effects add up with each night of unrest. The sympathetic nervous system — commonly known as the “fight or flight” response — is then activated by the pause in breathing, put- ting the body under extreme stress. Over time, this can lead to health problems.

Sleeping for Your Heart Health

A message from Chapter 351 in Whittier, ... CA - Let the best kept secret out of the bag and get Mended Hearts information into the hands of Heart Patients around the world!

A message from Chapter 351 in Whittier, CA - Let the best kept secret out of the bag and get Mended Hearts information into the hands of Heart Patients around the world!