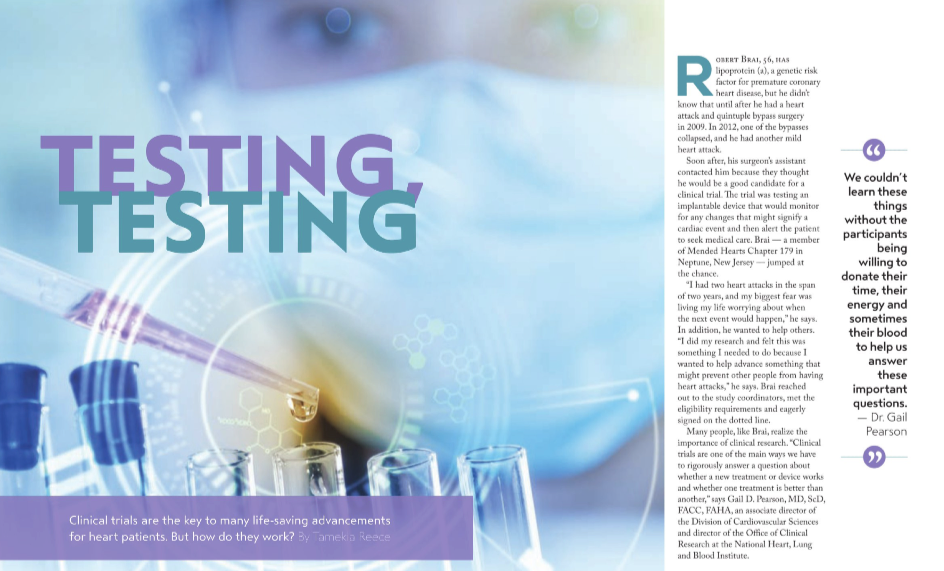 Robert Brai, 56, has lipoprotein (a), a genetic risk factor for premature coronary heart disease, but he didn’t know that until after he had a heart attack and quintuple bypass surgery in 2009. In 2012, one of the bypasses collapsed, and he had another mild heart attack.

Soon after, his surgeon’s assistant contacted him because they thought he would be a good candidate for a clinical trial. The trial was testing an implantable device that would monitor for any changes that might signify a cardiac event and then alert the patient to seek medical care. Brai — a member of Mended Hearts Chapter 179 in Neptune, New Jersey — jumped at the chance.

“I had two heart attacks in the span of two years, and my biggest fear was living my life worrying about when the next event would happen,” he says. In addition, he wanted to help others. “I did my research and felt this was something I needed to do because I wanted to help advance something that might prevent other people from having heart attacks,” he says. Brai reached out to the study coordinators, met the eligibility requirements and eagerly signed on the dotted line.

Many people, like Brai, realize the importance of clinical research. “Clinical trials are one of the main ways we have to rigorously answer a question about whether a new treatment or device works and whether one treatment is better than another,” says Gail D. Pearson, MD, ScD, FACC, FAHA, an associate director of the Division of Cardiovascular Sciences and director of the Office of Clinical Research at the National Heart, Lung and Blood Institute.

Without clinical trials, we wouldn’t have many of the medications and devices that have helped to prevent, detect or treat disease. There are many clinical trials that can benefit people with heart conditions, but not everyone knows how to get involved.

What’s in It for You?

If you’re like many people, you probably wonder what’s in a clinical trial for
you. Sure, doing something that could advance science and help others is a good thing, but it’s only normal to wonder if participation will benefit you personally.

For Brai, being part of the trial brought a sense of comfort. “I didn’t feel trepidation or fear going to the gym or playing hockey, knowing I had this device that would warn me if something was impending,” he says.

Clinical trials also provide heart patients with the opportunity to receive the newest treatments. Peter Stewart was diagnosed with coronary artery disease in 2000 and had a triple bypass in 2004. About two and a half years ago, he needed aortic valve replacement.

His cardiologist mentioned a trial that might allow him to get a transcatheter aortic valve replacement (TAVR). With a TAVR, a new aortic valve would be delivered by a catheter, eliminating the need for open-heart surgery. After researching the procedure, he signed up.

“I didn’t want to have my chest opened again,” says Stewart, who is a member of Mended Hearts Chapter 126 in Scottsdale, Arizona. “Since I’m younger, I couldn’t have gotten a TAVR without being in this trial,” he says. (TAVR has only been approved in the U.S. since 2011 and is mostly used for people who are over the age of 80 and who are too weak or unsuitable for open-heart surgery.) Stewart has two years left in the five-year study and is doing well with his TAVR.

Greg Szajna of Mended Hearts Chapter 341 in The Woodlands, Texas, got similar benefits from his participation in a clinical trial. He had a TAVR implanted as part of a trial in 2015. Doctors discovered that he had an aortic aneurysm, and one of his aortic valves was so calcified, they couldn’t get a catheter through it.

Initially, he wanted a mechanical valve because he didn’t want to have his chest opened and because he had heard that biological valves require a lifetime of immunosuppressant drugs (which isn’t true for all cases).

“My doctor said, ‘If you’re going to drink alcohol [Szajna is a representative for a liquor company], a mechanical valve isn’t a good choice because blood thinners and alcohol don’t play well together,’” Szajna says. Shortly after, the doctor told him about a trial for a TAVR that doesn’t routinely require blood thinners. Szajna saw it as a win-win: He wouldn’t have to undergo open-heart surgery or use blood thinners for the rest of his life.

Despite the potential benefits of clinical trials, getting participants isn’t always simple. “Over the last 10 or 15 years, clinical trials have gotten more complicated, which means they may require multiple study visits, more testing, possible travel, time away from work and the need for childcare,” Dr. Pearson says.

That can be inconvenient for some people and their families. Trial coordinators do all they can to reduce the inconvenience, usually paying for transportation, parking and any overnight stays. Some studies, especially pediatric ones, even have an area for children if a sibling is undergoing study procedures.

Another reason some people are hesitant about clinical trials is that they’re concerned about not knowing which treatment they might get (many trials are randomized) or they’re afraid of possible side effects.

Rest assured, drug manufacturers and device makers don’t just develop
a new product and immediately start testing it on people. Medications and devices undergo years of laboratory research and experiments on animals and human cells. If those experiments are successful, the data is sent to the Food and Drug Administration (FDA) for approval before any testing is conducted on humans.

“Also, the people running trials do a really good job of laying out all potential side effects, including ones that are very rare and may not happen, in both the protocol and the informed consent form that any participant might sign,” Dr. Pearson says.

In addition, study participants are monitored closely and can withdraw from the trial at any time.

A trial may study a new drug or combination of drugs, a new medical device, a new way of doing surgery or new ways to use existing treatments. It may also look for new ways to change behaviors to improve health or to increase the quality of life for people with illnesses or conditions.

Whether you want to try out a new medication or technological device or enroll in a trial that focuses only on lifestyle changes, there is likely to be a clinical trial that is right for you. But how do you find a study?

Many heart patients learn about clinical trials through their doctor, but you can also check the websites and social media pages of national health organizations and support groups like Mended Hearts. ClinicalTrials.gov is a useful, searchable database of privately and publicly funded clinical studies being conducted around the world.

Once you hear about a trial that piques your interest, you’ll need to get in touch with the coordinator. The contact information should be available through whichever means you heard about the trial or through the ClinicalTrials.gov site.

After you reach out, the next step will probably be a phone call with someone who can provide you with more details about the study. The research team will also provide you with what’s called an informed consent form. This document includes written details about the study, including its purpose, how long the trial is expected to last, what kind of tests or procedures will be performed, the risks and potential benefits of the trial and who to contact for further information.

It’s also a good idea to ask questions of your own, Dr. Pearson says.
Some questions to consider asking may include:

“You want to make sure you understand the answers to all of your questions before you sign the informed consent form,” Dr. Pearson says.

If you do decide to participate in the study, the intake process will depend on the trial. It may be a quick questionnaire or electronic sign-up form, or it could be an extensive process that requires an exercise test, blood work and other testing. The same is true for monitoring and follow-up testing. Some trials require many visits to the trial site and a lot of testing, while others demand less from participants.

Stewart’s study, for example, requires a visit every six months for the first two years and then once a year after that. He doesn’t find the once-a-year visits too inconvenient. “They do various tests to check me and the TAVR out and the whole process takes only about two hours,” he says.

Follow-up screenings will also include discussions about any side effects. There are a number of safeguards built in to protect participants, as much as possible, from adverse effects resulting from the study treatment, Dr. Pearson says. However, just like any medication or treatment, whether prescription or over- the-counter, there is always a potential for side effects.

Brai experienced more of an annoyance than a side effect. “Going through airports, I had to get a pat-down because the device would set off the metal detectors,” he says. Neither Stewart nor Szajna had any side effects.

After a clinical trial is completed, every participant should be notified of the results and told which study arm they were in (whether they received one treatment or the other if they were in a randomized trial).

“We make every effort to try to communicate the answer to all participants because we couldn’t learn these things without the participants being willing to donate their time, their energy and sometimes their blood to help us answer these important questions,” Dr. Pearson says.

If you benefitted from the intervention used in the trial, you may be allowed to continue receiving or using it after the trial’s completion.

At the end of the three-year trial that Brai participated in, he was given the option to either leave the device in or have it removed. He chose to have it removed. Still, he feels good about his experience and says he would be open to participating in other studies. “If we want to help find cures, participation in clinical trials is necessary,” he says.