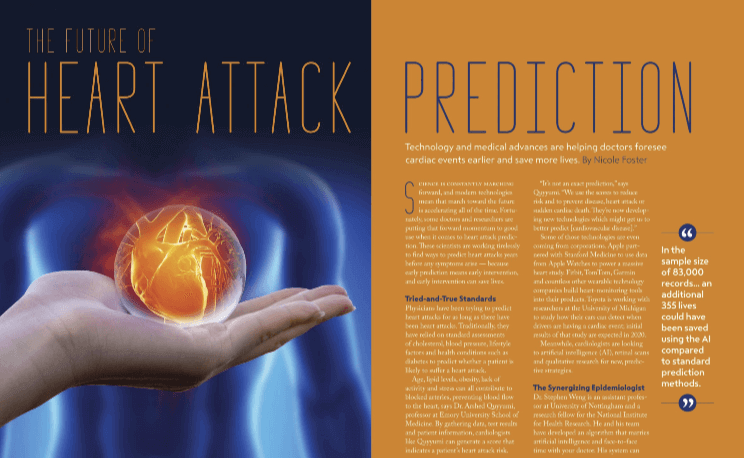 Science is constantly marching forward, and modern technologies mean that march toward the future is accelerating all of the time.

Fortunately, some doctors and researchers are putting that forward momentum to good use when it comes to heart attack prediction. These scientists are working tirelessly to find ways to predict heart attacks years before any symptoms arise — because early prediction means early intervention, and early intervention can save lives.

Physicians have been trying to predict heart attacks for as long as there have been heart attacks. Traditionally, they have relied on standard assessments of cholesterol, blood pressure, lifestyle factors and health conditions such as diabetes to predict whether a patient is likely to suffer a heart attack.

“It’s not an exact prediction,” says Quyyumi. “We use the scores to reduce risk and to prevent disease, heart attack or sudden cardiac death. They’re now developing new technologies which might get us to better predict [cardiovascular disease].” Some of those technologies are even coming from corporations. Apple partnered with Stanford Medicine to use data from Apple Watches to power a massive heart study. Fitbit, TomTom, Garmin and countless other wearable technology companies build heart-monitoring tools into their products. Toyota is working with researchers at the University of Michigan to study how their cars can detect when drivers are having a cardiac event; initial results of that study are expected in 2020.

Dr. Stephen Weng is an assistant professor at University of Nottingham and a research fellow for the National Institute for Health Research. He and his team have developed an algorithm that marries artificial intelligence and face-to-face time with your doctor. His system can predict heart attacks 10 years before they occur with 76 percent accuracy.

The algorithm sorts through all of the electronic patient records within a practice, recognizing a specific set of data that suggests a heart attack is imminent. In trials, the AI was able to determine an individual’s risk in a matter of minutes.

Depending on the patient’s cardiac forecast, their physician may begin appropriate interventions with medications to manage cholesterol, diabetes and high blood pressure as well as recommendations and plans to change damaging habits.

“A doctor can look at a list of individuals at risk of heart disease and say, ‘Let’s call them in,’” says Weng. “That’s prevention.” In trials, the system predicted 7.6 percent more events than traditional methods with 1.6 percent fewer false alarms.

In the sample size of 83,000 records, that means an additional 355 lives could have been saved using the AI compared to standard prediction methods. Before the program can find its way into your doctor’s office, Weng will need to rely on software companies to figure out how to make the algorithm compatible with existing in-office systems.

Weng has figured out all of the answers except one: What happens if a patient is found to be at low risk of a heart attack? Will that patient interpret the news as permission to indulge in unhealthy foods? Will they decide to excuse themselves from exercising, worsening their heart attack forecast? Weng will only know these answers when the algorithm is released, which he thinks will be in the next year.

The Eyes Are the Window to… the Heart?

Dr. Lily Peng, a product manager at Google, works with a team of researchers to learn how blood vessels in the eyes can predict heart attack risk. According to Peng, patients’ retinal scans contribute valuable information to her group’s algorithm.

Together, the components were quite successful at recognizing which patients had experienced a cardiovascular event. “Given the retinal image of one patient who later experienced a major cardiovascular (CV) event, such as a heart attack, and the image of another patient who did not, our algorithm could pick out the patient who had the CV event 70 percent of the time,” says Peng. “This performance approaches the accuracy of other CV risk calculators that require a blood draw to measure cholesterol.”

Although testing is still in early phases, Peng recognizes this as a very promising start. To make retinal fundus photography useful to patients, Peng and her research team will continue to study the effects of interventions such as lifestyle changes and medications in correlation with risk predictions. For now, they will keep generating new hypotheses and theories to test.

While wearable monitors, AI, cameras and other technology are extraordinarily useful tools in the fight to prevent heart attacks, some indicators may have been inside patients all along. Cardiologists are studying how certain gut bacteria, biomarkers and molecules can provide clues about a patient’s likelihood of a heart event.

The European Society of Cardiology found that measuring levels of a molecule called trimethylamine N-oxide (TMAO), which is produced by gut bacteria, could help them reliably assess a patient’s risk of heart problems. They believe that measuring TMAO levels could predict the risk of death up to seven years later.

Back at Emory, Dr. Quyyumi and his colleagues have identified a trio of biomarkers that may help with prediction.

Quyyumi is interested in looking at plaques in the bloodstream as predictors. Some plaques, he explains, remain “quiet,” while others are active. These active plaques become inflamed and are more likely to rupture, leading to heart attack or death.

His question for future research is “Can we try to detect activation of plaque by looking for blood markers?” When asked if he thought early prediction may eventually eradicate heart attacks, Quyyumi said that years ago, his answer would have been no. Today, though, he’s more optimistic. “I think it is possible. We can diagnose the condition much better. It’s possible this will become less of a problem. We’re moving in the right direction.”

Ladies, do you prefer a male or female ... doctor? As it turns out, seeing a cardiologist of the same gender could be linked to better health outcomes. Find out what new research says about gender and cardiology. #mendedhearts #hearthealth http://ow.ly/RKJI50EdMzq

It’s not too late to register (free)!