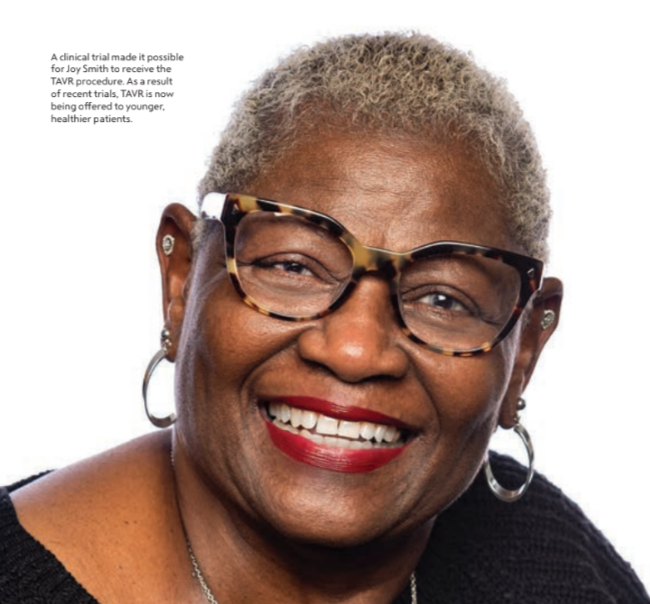 For years, Joy Smith had aortic stenosis (AS), a condition usually caused by calcium buildup on the valve as people age or a congenital heart defect. With AS, the leaflets of the aortic valve become thicker and stiffer, making it difficult for blood to flow from the heart to the body. Left untreated, it can weaken the heart and cause complications that can ultimately be life-threatening.

Smith, now 78, had regular heart check-ups. Her cardiologist told her they would eventually need to do something about her heart valve, but since she didn’t have any AS symptoms, such as chest pain, shortness of breath, fatigue, heart palpitations or feeling faint or dizzy with activity, it wasn’t an immediate need.

“I was walking from my car and I got out of breath and had a burning feeling down the middle of my chest,” says Smith, a member of Mended Hearts Chapter 106 in Chicago. She’d had an echocardiogram six months earlier, so she attributed the pain to her bad back.

Then, a week later, it happened again. “I was walking to my car and that burning sensation came straight down the middle of my chest,” Smith says. “I knew something wasn’t right.”

She went to her doctor and, this time, the echo showed her valve had narrowed significantly in just six months. She needed a valve replacement.

In February 2018, Smith had a transcatheter aortic valve replacement (TAVR), a less invasive procedure to replace damaged aortic valves. Years ago, TAVR would not have been an option for her, as the procedure was reserved only for patients who were considered too old or too ill to have surgical valve replacement. Typically, that meant only people 80 and older got TAVR.

Since Smith was relatively healthy and considered to be low risk for death or major complications from surgery, usually open-heart surgery would have been recommended. However, her cardiologist asked if she was interested in participating in a clinical trial studying TAVR in low-risk patients. “My doctor said TAVR was less invasive, had a quicker recovery time and the study would be helpful to a lot of people, so I went with it,” Smith says.

The results of two major clinical trials, PARTNER 3 and the Evolut Low-Risk TAVR trial, led to the FDA approval of TAVR in August 2019 for people who are lower risk, “younger and healthier” than previous patient groups. That means more people will be able to reap the benefits of this life-saving procedure.

For heart doctors and their patients, TAVR has been a game-changer. “The traditional way to treat AS has been with open-heart surgery, during which we make an incision in the chest, use a heart-lung bypass machine to stop the heart, and then cut out the old valve and put in a new one,” says Mark Russo, M.D., chief of cardiac surgery at Rutgers-Robert Wood Johnson Medical School and the director of structural heart disease at Robert Wood Johnson University Hospital.

Surgical valve replacement is a great procedure that is time-tested and has saved millions of patients’ lives. However, TAVR is a newer, less invasive option.

During the TAVR procedure, surgeons make a small incision in the femoral artery (the large artery in the groin area of the leg) and use a catheter to place the new valve directly inside the old, damaged valve. The new valve then takes over the native valve’s job of regulating blood flow.

As helpful as it is, for the longest time, low-risk groups — which most people with AS fall into — didn’t have access to TAVR because it wasn’t FDA-approved, since most of the research into the procedure looked at higher-risk people.

The natural progression of how researchers evaluate therapies is typically to offer them to patients at highest risk who don’t have other options and then, over time, graduate down to patients at lower risk, says Dr. Russo.

“When we studied the benefits of TAVR, we first looked at the highest-risk patients, those who were not candidates for open-heart surgery and didn’t have a good option, then we moved on to patients that were high risk for heart surgery but could still undergo it, and then intermediate-risk patients, those who were pretty reasonable surgical candidates,” he explains. As a result, there wasn’t much data on the safety and effectiveness of TAVR in younger, healthier people.

That changed with the recent trials studying thousands of low-risk patients who were randomly chosen to have either TAVR or surgical valve replacement. Both studies showed TAVR in low-risk patients performed better than (PARTNER 3 Trial) or as good as (Evolut Trial) surgical aortic valve replacement in many areas. In August 2019, the FDA approved and expanded the use of these two well-established transcatheter valves, making them available for use in low-risk people with severe AS.

TAVR is just as beneficial in healthier, younger people as it is for older, more frail patients. Of course, the biggest concern for most is safety. “The risks of both surgery and TAVR are relatively low, particularly in low-risk patients,” Dr. Russo says.

TAVR recovery is also easier and shorter. The amount of time people spend in the hospital after valve replacement is, on average, reduced from seven days to three with TAVR. “I went in for the procedure on a Wednesday and was back home by Friday evening,” Smith says. “It still amazes me.”

Once people go home, most are back to normal activity within a few days to a week of the procedure, Dr. Russo says. The recovery time for surgical valve replacement, on the other hand, is usually four to eight weeks and can sometimes take months.

Many people who have TAVR report feeling better right away, such as breathing normally, experiencing less chest pain, having more energy and being able to do everyday activities. Even people who didn’t think they had symptoms may notice a difference. Laurie Stirone, 71, of Camarillo, California, was part of one of the clinical trials in 2018. “I’m really observant of my body, so I don’t know why I didn’t notice it, but I guess I was shorter of breath than I realized, because I’m able to breathe better and I have less fatigue since the TAVR,” she says.

That’s not to say TAVR is perfect. It has its risks, including death, stroke, damage to the blood vessels and bleeding. However, there are risks with any medical procedure, and the odds of most of these issues occurring are lower with TAVR than with surgical valve replacement.

Stirone had a minor stroke during the procedure, but it may have been related to other issues. “I had mitral valve prolapse since I was a little girl, had three minor strokes when I was younger and have been on blood thinners most of my life,” she says. Her doctors think those factors may have caused a small clot in her heart, which led to the stroke during the TAVR.

Fortunately, her only side effect from the stroke was difficulty using her right hand, and that improved quickly. “I had some home therapy and did hand exercises, and in a month or so, my hand was back to normal,” she says.

Still, despite the stroke, Stirone sings the praises of TAVR. “The technology is phenomenal, and the procedure was fantastic. It’s so much better than invasive surgery,” she says.

Now that TAVR is approved for all risk levels of patients, more people will be able to avoid open-heart surgery. However, that doesn’t mean TAVR is right for everyone with AS. People who can’t tolerate blood-thinning medications, or who have an infection in the heart or elsewhere in the body, should not get the procedure. TAVR may not be good for some people based on anatomical considerations such as if their aortic valve is too small or too large for the new valve.

Also, neither of the low-risk trials tested people with significant coronary disease or bicuspid valves (an aortic valve that has only two leaflets, instead of three).

In addition, even though there’s no age restriction in the FDA’s approval, the mean age in the trials were 74 and 73, with only a small percentage of people being younger than 65 years of age. Therefore, the data from the trials are specific to people of similar age.

That’s not to say young people can’t or shouldn’t get TAVR. “Whether or not someone can get TAVR isn’t based on age, as there’s no age limit,” Dr. Russo says. “It’s a decision patients should make with their physicians based on the patient’s unique situation.”

One thing that’s unclear about TAVR use in younger patients is how long the valves will last. The durability of valves is determined by many patient-driven factors, so the life span of a valve, whether a TAVR valve or a surgical valve, will vary by patient. “The current generation of TAVR valves appear to be as durable as surgical valves,” Dr. Russo says. Both low-risk trials will follow participants for 10 years to further monitor the safety, effectiveness and long-term durability of the TAVR.

Even with the unknowns, Smith says she is grateful for TAVR. “I believe it saved me from having a heart attack,” she says. “And to get the good news that TAVR is now going to be offered to more people, it’s just wonderful.

To determine if TAVR is the right treatment for you, find a TAVR doctor at newheartvalve.com/ find-tavr-hospital