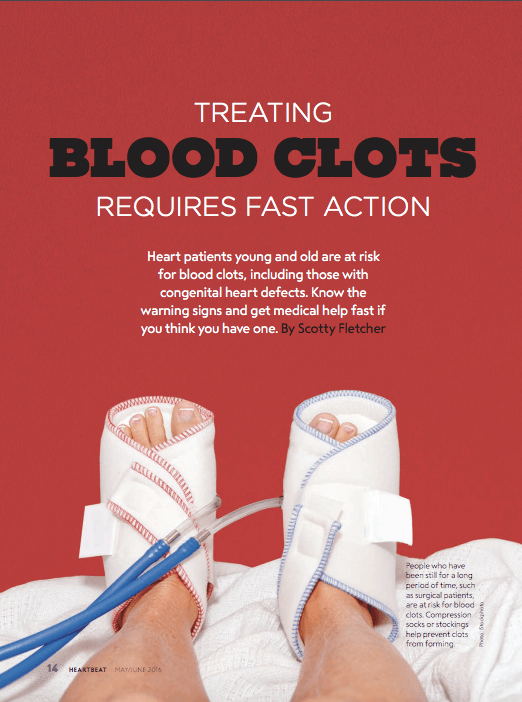 When Lucien Dusablon, of Mended Hearts chapter 338 in Woonsocket, R.I., noticed the toes on his left foot were changing colors, he thought it was just a symptom of his diabetes.

Dusablon, who became a member of Mended Hearts in 2010 after recovering from a blocked artery, has suffered from diabetes for many years and chalked the discoloration and leg pain up to the disease.

“I thought it was the diabetes, but when the doctor did a sonogram on my leg, he saw that I had a blood clot behind my left knee,” Dusablon says.

Dusablon was immediately admitted to the hospital and given blood thinners. He stayed hospitalized for six days until the clot dissipated and he regained feeling in his leg.

“When the clot dissolved and the bottom of my leg got the rush of blood it needed, it was very painful,” says Dusablon.

What Are Blood Clots?

A blood clot is a gelatinous mass of blood that changes from liquid form to a semisolid state. Blood clots can be life-saving when they help stop bleeding — for instance after an injury. But when they form inside a vein and don’t dissolve on their own, blood clots can get into the bloodstream and block the flow of blood to the heart or brain, leading to a heart attack or stroke. Clots can also form when plaque deposits in the blood vessel walls rupture.

In the medical field, a blood clot is known as VTE, or Venous Thromboembolism. If the clot forms in the leg or another deep vein, it is called Deep Veinous Thrombosis or DVT.

A blood clot that breaks loose and travels to the lungs is a Pulmonary Embolism or PE. This typically occurs after someone has been still for a long period of time, such as during a long flight or surgery, and can be deadly. DVT is the main cause of pulmonary emboli.

Blood clots become dangerous when they get into the bloodstream because they can block the flow of blood to the heart or brain and cause a heart attack or stroke.

Though VTE is most common in adults 60 and older, blood clots can occur at any age, including in children. Clotting is more likely to happen in people who are obese, smoke, take estrogens or birth control pills, or have underlying conditions such as cancer or certain autoimmune disorders. Recent surgeries can also increase risk.

Some people are more likely to form blood clots because their blood is thicker than normal because too many blood cells are made by bone marrow. Others are genetically predisposed to clotting, though this is less common.

The primary method of diagnosing DVTs is an ultrasound examination of the leg veins called a lower extremity venous duplex.

This exam checks the leg for clots and tells the patient’s doctor where the clot is, how extensive it is, and in some cases, how long it has been there. It can also be used to follow-up with patients with existing clots to see if they are improving, stable or worsening.

The lower extremity venous duplex is typically performed by a trained ultrasound technologist and uses an ultrasound probe to directly check the veins in the legs. The exam involves no radiation exposure and can be done in a variety of locations. It is typically interpreted by physicians with special training such as radiologists, vascular surgeons, cardiologists and certified vascular medicine experts.

“The presentation of DVT can vary, but one of the most common presentations is leg pain,” says Dr. Joseph Glaser, a nuclear medicine and vascular ultrasound specialist with Radiologic Associates, PC. “The patient’s legs may be swollen or discolored, but that doesn’t always happen. If you speak to your doctor about persistent leg pain and they send you for one of these exams, it is a potential emergency and should not be delayed so that if a clot is found, treatment can be promptly started.”

Though further work-up and treatment may depend on other factors, the standard treatment for blood clots is to put the patient on blood thinners for several months, Dr. Glaser says.

Though blood clots are more common in adults, children are also at risk for developing clots — especially kids with congenital heart defects. About 1 in 10,000 children get blood clots, including as many as 1 in 200 children in hospitals, according to Johns Hopkins University School of Medicine.

Lindsey Bilodeau’s daughter, Madeleine, was born with a several heart defects: Ebstein’s anomaly (which involves a malformed tricuspid valve), ventricular septal defect and coarctation of the aorta. Madeleine had her first heart surgery just five days after she was born. One month after surgery, her parents noticed that her heart rate and breathing were elevated and pushed doctors to do an echocardiogram, which uses sound waves to produce images of the heart.

The test revealed that a blood clot had formed on top of the Gore-Tex patch that had been used to repair Madeleine’s tricuspid valve. Within 24 hours of doctors finding the clot, Madeleine was back in surgery to remove it.

“It was the most urgent we had seen the doctors react,” says Bilodeau. “They said that if the clot were to break off, she could have brain damage or a stroke, which could be fatal.”

Madeline, who will be three in December, has not had another clot since and is on a preventative aspirin regimen.

“Asher was born with several congenital heart defects, but the clots turned out to be a bigger issue than all of the heart conditions combined,” she says. “Once he developed the clots, the hematologist came in and said that even though blood clots in infant heart patients is somewhat common, there is little research on how to best treat them.”

The foundation worked with a hematologist to create a card that explains the warning signs and risks of blood clots in children. They partner with Mended Little Hearts of Chicago to include the cards in hospital Bravery Bags for parents of children with congenital heart defects.

“A blood clot may not be the first thing that comes to mind and doctors often misdiagnose the symptoms as a cold or the flu,” says DeBouver. “We wanted to give parents a heads-up so that they can recognize the signs and symptoms.”

The cards, which are currently distributed to five hospitals in Chicago, are available through the foundation’s website at www.asherjamesfoundation.org.

In May of 2008, after feeling unusually fatigued, Fredonia Williams, Ph.D., President and Newsletter Editor of Chapter 260 in Huntsville, Ala., underwent a cauterization for a leak in one of her heart valves. She was scheduled to have the valve surgically repaired in June. But on Mother’s Day, when the preacher asked all of the mothers to stand at church, Williams felt an unusual pain when she stood up.

“I thought I had pulled a muscle in my groin area,” she says. “It just didn’t feel right.”

She still felt a little “off ” on Monday and stayed home from work. Her husband urged her to call the doctor. After examining Williams, the doctor immediately admitted her to the hospital, where she stayed for five days on blood thinners.

“They did a sonogram and saw the clot,” she says. “They wouldn’t even let me get off the table. They rolled me on a gurney to the hospital.”

The clot eventually dissipated and the surgery to repair the heart valve was done on schedule. Three days after surgery, while in ICU recovering, Fredonia noticed some unusual bleeding. The doctors discovered she had developed a clot on the lining of her heart.

Fredonia went into sudden cardiac arrest and was revived by a nurse. She spent 28 days in the hospital recovering — 21 of those days in ICU.

“I didn’t know what a blood clot felt like — I just knew that I didn’t feel right,” she says. “I was very lucky.”

When it comes to blood clots, listening to your body and being proactive is critically important.

“When you notice something different with your body — even it doesn’t seem related to a blood clot — don’t ignore it,” says Dusablon. “If something isn’t normal, don’t wait. Tell someone and get it checked out.”