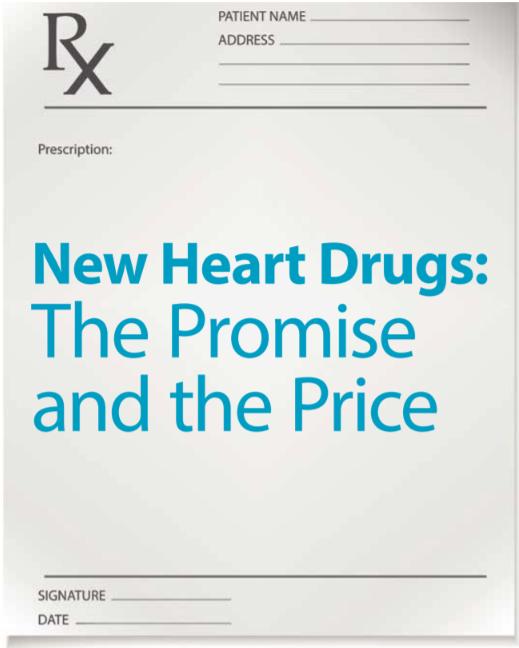 If you’re one of the 5 million Americans living with heart failure, or among the 10 million who have uncontrolled cholesterol despite being treated for it, 2015 may be your lucky year. Starting this past April, drug companies have brought several new groundbreaking medications to market that offer people with heart failure or high cholesterol totally new approaches for treating their conditions.

These drugs are creating quite a buzz in the cardiology community, and for good reason. For starters, there’s the sheer number of them: Two drugs, Corlanor and Entresto, were approved by the FDA for heart failure patients. Two other medications – Praluent and Repatha – were approved for treating high cholesterol.

What’s more is that these products aren’t merely improvements to what’s already out there. They work differently than standard drugs prescribed to patients with high cholesterol or heart failure.

“New medications come out all the time, but they’re often in the same class as the medications that are already out,” says Parin Parikh, M.D., an interventional cardiologist with Presbyterian Heart and Vascular Group in Dallas, a Texas Health Physicians Group practice. “What’s nice about these is that they offer novel mechanisms of action.”

In clinical trials, each of these drugs showed promising results not only in treating the condition they were intended to treat, but also in reducing re-admissions to hospitals. This could mean huge advantages for hospitals as they look for solutions to help them avoid financial penalties that the Centers for Medicare and Medicaid Services now place on those that have excessive readmissions for certain conditions, including heart failure.

But the excitement should be tempered with caution. Any new drug entering the marketplace is expensive, and the four discussed in this article are no exception. Two of them, in fact, can cost upwards of $10,000 a year per patient. Patients may not be willing to pay this much, nor may pharmacy benefit managers.

Also, it will take time to see if the benefits seen in clinical trials will bear out when given to more patients. Without much clinical data yet, cardiologists want to see what patients are paying for before they start prescribing these new drugs widely.

So just what could patients be paying for? Let’s take a look.

a candidate to take Corlanor, by Amgen, or Entresto, by Norvarits. Both drugs are for heart failure where the lower-left part isn’t contracting well, and in studies, Corlanor and Entresto were shown to reduce hospital readmissions. Entresto also significantly reduced the risk of cardiovascular death when compared to a common ACE-inhibitor called enalapril. The similarities between the two end there, though, as the drugs fall into different classes of medications.

In April this year, Corlanor became the first new chronic heart failure drug approved by the FDA in nearly a decade. In an international clinical trial, researchers divided 6,500 patients into two groups. One group received Corlanor while the other received a placebo. Participants in both groups continued taking their current heart failure medications (including beta blockers, ACE inhibitors, ARBs, diruretics and anti-aldosterone agents). The study compared each group’s risk of hospitalization and found that those taking Corlanor in addition to their standard treatment lowered their risk of hospitalization by 18 percent.

How does it work? By targeting and slowing down the heart’s pacemaker cells, which control the heartbeat. While beta blockers can also slow the heart rate, they lower the blood pressure as well.

“One of the challenges that we have when we treat patients who have heart failure with a depressed ejection fraction is the fact that, especially when they are first diagnosed, their heart rates are high but their blood pressures are not real good,” says Dr. Sreenivas Gudimetla, a general cardiologist with Consultants in Cardiology in Fort Worth, Texas. When these patients are given the standard therapies — including beta blockers such as Carvedilol — their heart rates tend to improve, but their blood pressures drop, he explains.

“With Carvedilol, we’d coach patients that, ‘OK this will make you feel lousy for a while, but you’ve got to trust me and stick it out,’ ” Dr. Gudimetla says. “Beta blockers reduce workload of heart, but these patients are fragile, and it can make them feel bad.”

Corlanor, by contrast, “is a drug that helps lower the heart rate without affecting the squeeze of the heart,” he explains.

Entresto, which the FDA approved in July, is also for heart failure patients with poor ejection fraction. It is in a different category of drugs than Corlanor and actually contains two medications in one pill: valsartan (an ARB that has been around since 1997) and sacubitril. Sacubitril, is the first of a new class of drugs called neprilysin inhibitors, which stop an enzyme called neprilysin from breaking down peptides that lower blood pressure.

“Compared to what we’ve been treating patients with, this drug actually has better outcomes,” Dr. Gudimetla says. A recent clinical trial supports this. In the study, Novartis compared Entresto to the common ACE inhibitor enalapril. (ACE inhibitors are one of the main treatments for heart failure.) 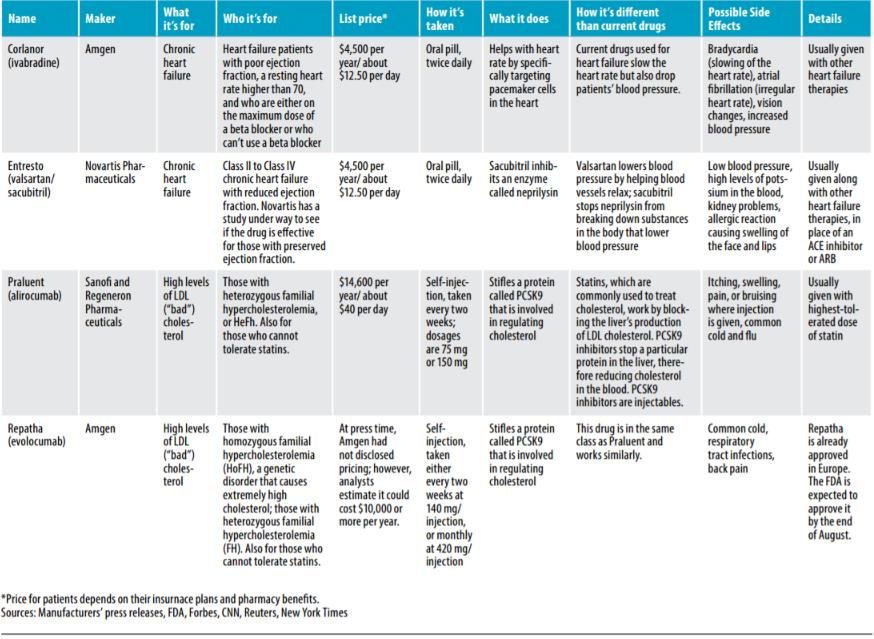 Entresto was shown to not only reduce the risk of heart failure hospitalization by 21 percent, but it also reduced the risk of cardiovascular death by 20 percent. In other words, by the end of the study, patients taking Entresto instead of enalapril were more likely to be alive and less likely to have been in the hospital because of heart failure.

“The results were really promising in that it showed a pretty drastic reduction in readmission rates, and even in mortality, which you really don’t see in trials now,” says Dr. Parikh, who is also on the medical staff at Texas Health Presbyterian Hospital Dallas.

The Personal and Economic Costs of Heart Failure

What will heart patients pay for these new drugs? Both Corlanor and Entresto will cost about $12.50 per day, or $4,500 per year. Compared to some heart failure medications, many of which are available as inexpensive generics, the price for Corlanor or Entresto may seem steep.

On the other hand, the estimated total lifetime direct cost of heart failure is $110,000, with hospitalizations accounting for about $73,000 per person, according to Novartis. That means the price of a newer, promising drug may be worth it if it can keep patients out of the hospital.

And heart patients aren’t the only ones trying to keep themselves from making multiple trips to the hospital. The health care system as a whole has an interest in keeping patients well outside the walls of a hospital. Heart failure costs were approximately $31 billion in 2012 — $21 billion was from direct costs, and $10 billion was attributed to indirect costs, according to the American Heart Association.

“Heart failure is chronic, and that’s why it’s often difficult to manage. Patients think they are cured, so they stop taking their medication and then they end up back in the hospital,” says Dr. Parikh. “These medicines are good both for patient’s sake and hospital’s sake. It takes up a lot of health care dollars when patients aren’t managed properly.”

“Melting Away” Bad Cholesterol, For a Price

Two of the four drugs discussed in this article target a health problem that could eventually lead to heart failure, and that is high cholesterol. While statins and other types of cholesterol-lowering drugs work well for many patients, some people simply can’t tolerate the side effects, and others don’t respond to them.

In fact, there are an estimated 10 million people in the United States who have trouble managing their LDL (“bad”) cholesterol, even with the standard treatment, according to PhRMA, the Pharmaceutical Research and Manufacturers of America. High cholesterol can increase a person’s risk for heart disease, heart attack and stroke.

Enter a completely new class of drugs called PCSK9 inhibitors. Praluent, by Sanofi and Regeneron Pharmaceuticals, is one of them. It won FDA approval in July. A competitor, Repatha, from Amgen, received FDA approval a month later in the United States.

“In comparing PCSK9 inhibitors to statin therapy, the stuff almost melts away cholesterol,” Dr. Parikh says. “Praluent was shown to reduce cholesterol by 50 to 60 percent after following patients for a year to a year and a half. There’s pending data on whether it can reduce heart attacks, stroke and death.”

Who will benefit from these drugs? “If you have a hereditary form of familial hypercholesterolemia, or FH — so you have a genetic reason to have very high cholesterol. That’s not a common indication. The second one is for patients who have known heart disease, who’ve had a heart attack, had stents, and they are truly intolerant to statins — they either don’t work or they don’t tolerate it,” Dr. Parikh says.

Who will benefit from these drugs? “If you have a hereditary form of familial hypercholesterolemia, or FH — so you have a genetic reason to have very high cholesterol. That’s not a common indication. The second one is for patients who have known heart disease, who’ve had a heart attack, had stents, and they are truly intolerant to statins — they either don’t work or they don’t tolerate it,” Dr. Parikh says.

There is some debate, though, on how widely PCSK9 inhibitors will be used. The fact that Praluent and Repatha are self-injected may turn off some patients or cause problems with patient compliance.

Another factor that may turn patients away is the price tag. 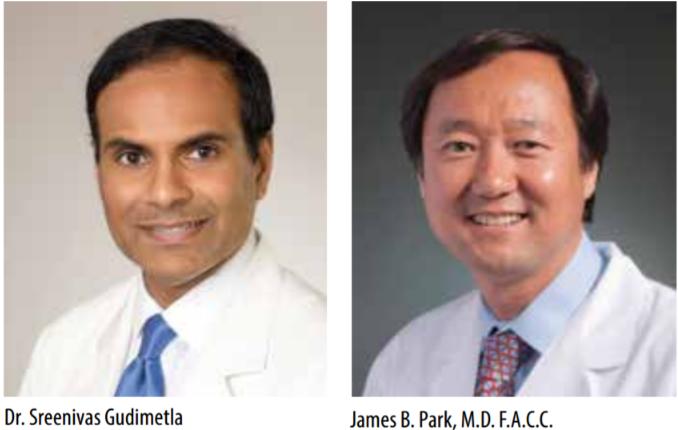 The list price for Praluent is $560 per injection, which is about $40 per day, or $14,600 a year. Pricing for Repatha is similar, although the dosing of it is different. “The issue is not if it’s going to work, it’s the cost of it,” says James Park,M.D., an interventional cardiologist who is also with Presbyterian Heart and Vascular Group, and director of the Heart and Vascular Program at Texas Health Presbyterian Hospital in Dallas.

Health insurers worry that if too many people take the drugs, and they take them for life, it could cost billions of dollars a year, according to an article in the New York Times. The Pharmaceutical Research and Manufacturers of America, however, says on its website that PCSK9 inhibitors “will not replace existing treatment options and will address a significant unmet medical need in a small subset of people.” It also stated that patients can expect to see discounts ranging from 30 to 65 percent on the medicines.

If patients and insurers can bear the cost, these new medications offer lots of hope for those living with chronic heart failure and those trying desperately to lower their cholesterol. “There’s more excitement about these new drugs than I’ve seen in a while,” Dr. Park says. “They’re essentially new ways of treating our most common diseases.

Heartbeat thanks Drs. Gudimetla, Parikh and Park for reviewing this article.