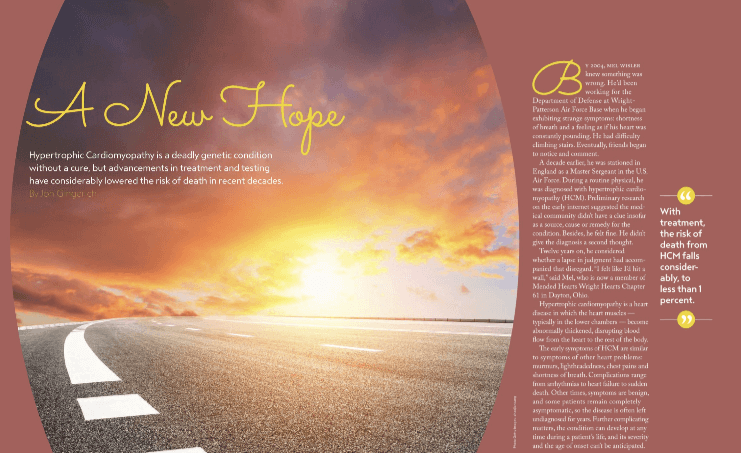 By 2004, Mel Wislerknew something was wrong. He’d been working for the Department of Defense at Wright- Patterson Air Force Base when he began exhibiting strange symptoms: shortness of breath and a feeling as if his heart was constantly pounding. He had difficulty climbing stairs. Eventually, friends began to notice and comment.

A decade earlier, he was stationed in England as a Master Sergeant in the U.S. Air Force. During a routine physical, he was diagnosed with hypertrophic cardiomyopathy (HCM). Preliminary research on the early internet suggested the medical community didn’t have a clue insofar as a source, cause or remedy for the condition. Besides, he felt fine. He didn’t give the diagnosis a second thought.

Twelve years on, he considered whether a lapse in judgment had accompanied that disregard. “I felt like I’d hit a wall,” said Mel, who is now a member of Mended Hearts Wright Hearts Chapter 61 in Dayton, Ohio. Hypertrophic cardiomyopathy is a heart disease in which the heart muscles — typically in the lower chambers — become abnormally thickened, disrupting blood flow from the heart to the rest of the body.

The early symptoms of HCM are similar to symptoms of other heart problems: murmurs, lightheadedness, chest pains and shortness of breath. Complications range from arrhythmias to heart failure to sudden death. Other times, symptoms are benign, and some patients remain completely asymptomatic, so the disease is often left undiagnosed for years. Further complicating matters, the condition can develop at any time during a patient’s life, and its severity and the age of onset can’t be anticipated.

HCM is relatively common, affecting about one in 500 people. It afflicts men and women equally. Sarita Fish of Merrick, New York, and her husband both suffer from the condition. At 51, Sarita was preparing for a colonoscopy when, during a routine pre-check, her gastroenterologist discovered a heart murmur. A follow-up appointment with a cardiologist confirmed she had HCM.

Sarita’s symptoms worsened. Walking up steps winded her to the point where she could climb only one flight at a time. She began experiencing heart palpitations and got so tired after meals, she’d fall asleep in her chair. Meanwhile, EKGs had revealed issues with her husband’s heart. He was put on an anti-arrhythmic drug (in this case, Norpace), and soon thereafter, discovered that he had HCM too.

About 90 percent of the time, HCM is inherited — the result of mutations in one of 17 different known genes shared by family members. There’s a roughly 50 percent chance children will inherit the disease from their parents.

The disease can have devastating effects on families. Laurel Dodgion, 71, the first vice president of Mended Hearts Chapter 16 in Lynchburg, Virginia, had seven siblings with HCM, and with the exception of two younger sisters, all have died from the condition. Her older brother Roddy experienced sudden death at age 17. Years later, her youngest brother, Timothy, died at 18. Her twin brothers Dennis and Doug died from heart failure in their early 30s, and both had daughters who were taken by the disease.

Her sister Gail passed away after she’d married and had children. Several years later, Gail’s son died suddenly during his first year in college.

Sadly, the indelible imprint HCM left on Laurel’s family is far from atypical. Gigi Imeson of Mended Hearts Chapter 40 in Stockton, California, has five siblings, and all but one share an HCM gene. One of her sisters was diagnosed with the condition but has never experienced symptoms. Another received a defibrillator.

Thankfully, they are all still living. Gigi exhibited no symptoms for years, and then began experiencing episodes of light-headedness in her 20s. A doctor misdiagnosed her condition as a misplaced heart bundle. Fifteen years later, Gigi began having difficultly exercising. In 2008, she had a transient ischemic attack, otherwise known as a “mini-stroke.” That’s when she discovered she had HCM.

Gigi’s initial misdiagnosis isn’t uncommon. HCM was discovered in the 1960s, but it wasn’t generally understood by the medical community until the last 30 years. As a result, it’s impossible to know whether a relative who died of, say, congestive heart failure 40 years ago actually had HCM. (Both Gigi and Laurel believe their mothers had it.) Had we known then what we know now about the disease, who knows how many lives might’ve been saved.

Dr. Srihari Naidu is an expert in the treatment of HCM and leads the Hypertrophic Cardiomyopathy Program at Westchester Medical Center in New York, which is regarded as one of the top HCM centers in the country. According to Dr. Naidu, one of the greatest challenges relating to HCM is the fact that some patients receive an echocardiogram (an ultrasound of the heart) and their doctor still doesn’t recognize the condition.

Other times, patients are diagnosed late — often decades after thickening of the heart muscles has begun, when late stage heart failure is present or after the condition has begun affecting other areas of the body. This history of oversight — among both patients and medical professionals — has only advanced the disease’s pernicious reputation.

“Awareness hasn’t been high in the past for HCM, even among cardiologists, and HCM was thought to be very rare, thus even many cardiologists did not recognize it,” Dr. Naidu said. “Once recognized, all patients should ideally be seen by recognized national centers of excellence that can offer all the tools and a team of physicians needed to diagnose and manage every aspect of the disease, and any progression of symptoms that occur over time.”

While there’s no cure for HCM, there is good news. Testing for the disease has advanced tremendously in recent decades, so the condition can be identified early and a variety of treatments are available. With treatment, the risk of death from HCM falls considerably, to less than 1 percent. Patients are started on a variety of medications, depending on their symptoms.

Beta blockers, diuretics, calcium blockers and an antiarrhythmic drug (such as Disopyramide) are standard treatments. Often, this is all a patient requires. If those remedies fail, invasive treatments may become necessary. Two options are the most common. One is a septal myectomy, or open-heart surgery. In a surgical myectomy, sections of the muscle wall obstructing the flow of blood are removed. Once the default option, this surgery isn’t always without risk, and myectomy carries a slightly higher chance that patients will later experience stroke or arrhythmias.

Another procedure that’s gained in popularity is alcohol septal ablation. During this minimally invasive procedure, pure ethanol alcohol is administered at varying doses to the ventricle wall, literally causing a controlled heart attack that kills the obstructing muscle, making it shrink gradually over time.

Alcohol ablation was first performed in Europe in the ’90s and arrived in the U.S. the following decade. Research suggests it has been as effective as open-heart surgery, with a shorter recovery time.

Dr. Naidu says that both procedures are often presented as options to the patient, with a course chosen based on what provides the greatest benefit for that patient’s symptoms and what procedure she/he prefers. Both Gigi and Sarita opted for alcohol ablation, for similar reasons: it’s a lot less frightening than open-heart surgery.

The procedure isn’t necessarily a silver bullet though. Gigi, who had the procedure in 2009 at Stanford, said she still experienced shortness of breath and arrhythmia and later began developing atrial fibrillation (A-Fib), requiring a defibrillator only nine months after the procedure.

Mel also initially chose ablation. He was ablated three times and received diminished returns from each procedure. His condition eventually worsened, and in 2011, he elected to receive a heart transplant. A heart transplant is the least common form of treatment for HCM, and the most invasive. It’s also the procedure that ended up saving Laurel’s life as well as the lives of her two surviving sisters, Joelle and Deirdre.

Like Mel, Laurel found herself running out of options. She didn’t realize she had HCM until she was in her 40s, after she’d had two children. She began experiencing symptoms — shortness of breath and irregular heartbeat — and a visit to the National Institutes of Health 25 years ago confirmed that she shared the disease that had taken her five siblings. Initially, she was treated with beta blockers and diuretics before a pacemaker was inserted in 2001.

Eight years later, she received a defibrillator and then an LVAD (left ventricular assist device). But nothing took, so finally, in 2010, she opted to receive a heart transplant.

“It’s like night and day,” Laurel said. “I can do anything I want to now. I can go running, swimming, anything. At my age, I keep telling myself that my body shouldn’t be doing well, but my heart feels great.”

Shortly after discovering she had HCM, Laurel had both of her children tested for the disease. Neither has it. Gigi has two kids; both received echocardiograms and genetic testing. Her son does not have the gene but her daughter does. Sarita has three children: One was born with a heart murmur, another has been tested and doesn’t carry the gene and the third has yet to get checked. However, even though Sarita herself carries the disease, she didn’t show signs of it during a genetic test.

This can happen. Genetic testing for HCM presents challenges for the medical field. For many other diseases, professionals often look for only one genetic mutation. For HCM, they could be looking for upwards of 500 mutations involving between 17 and 20 different proteins. Occasionally, as in Sarita’s case, the patient’s genetic mutation falls outside of the most common mutations professionals are looking for, so it’s possible to be tested after you’ve been diagnosed and still get a negative result.

Mel was even more of an outlier. Not only did a genetic study reveal no mutational cause for his condition, his family has no history of heart problems whatsoever. For these reasons, Dr. Naidu said that while he advocates for patient testing, he also believes every family member of someone known to have HCM should undergo a baseline periodic echocardiogram — ideally once a year — especially kids, in whom the condition typically progresses fastest.

“While genetic testing is very important in order to help track HCM in families, there are several limitations to testing, including cost, and some of the genes causing HCM still cannot be tested for,” Dr. Naidu said. “For this reason, it’s important that every family member of a known HCM patient gets an echocardiogram. Since the thickening grows fastest in young individuals, and they are also the people most likely to be pushing their hearts the most, echocardiograms should be checked once a year between puberty and early 20s, and then every three to five years after that.”

In the course of telling her family about the disease, Sarita’s brother was recently tested and discovered he has HCM, and she’s since found out that two cousins have it as well. Gigi said two of her nieces have discovered they have HCM, and genetic testing revealed that several other family members also share the gene.

“It took me a while to get it through my siblings’ heads to get tested,” Gigi said. “A lot of people think it won’t happen to them. I always tell them I’m living proof that it can.”