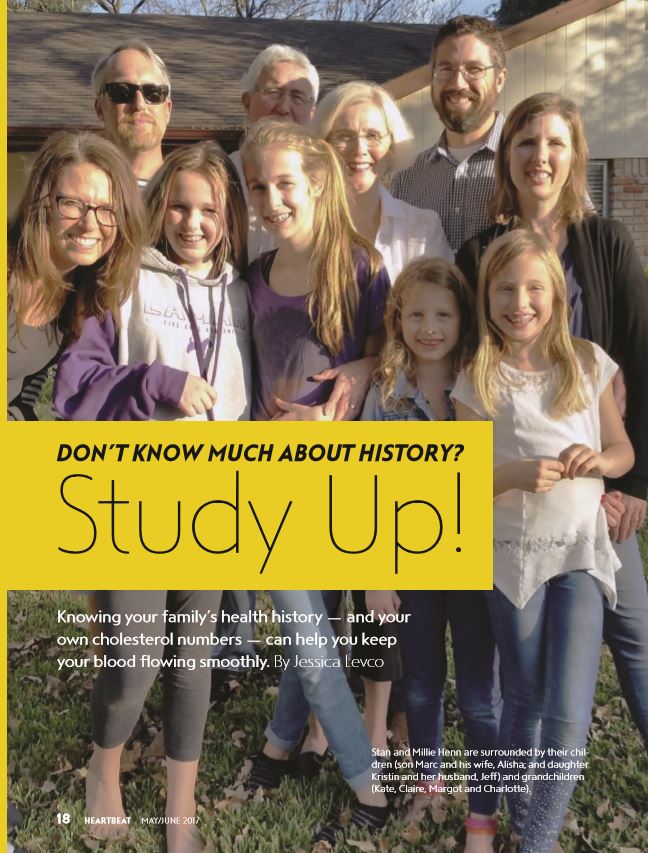 Millie Henn’s father died when he was 53 because of heart disease, caused in part from high cholesterol.

“I knew that heart disease was genetic, so when I was 49, I asked my doctor to take my cholesterol,” says Henn, executive vice president of Mended Hearts. “My LDL (bad cholesterol) was very high and my HDL (good cholesterol) was high, too. My doctor’s attitude was that these two cholesterols would counteract each other and there was nothing to worry about.”

But there was something to worry about. In 2000, she had double-bypass surgery. One artery was 100% blocked; the other was 99% blocked. She was diagnosed with coronary artery disease, caused by her high cholesterol.

“I didn’t really have any symptoms,” Henn says. “I was tired but thought that was because I hadn’t gotten enough rest. I was short of breath, but I explained that away, too. But one day, I realized something was not right and went to the ER. I found out that day about my blockages. Two weeks later, I was scheduled for surgery.”

Sarah Winslow, M.D., a family and prevention medicine physician with Adventist Health in Washington, says many people like Henn don’t realize they have problems with cholesterol. That’s because your body can’t tell you if your cholesterol is high or low.

“It’s also important to think about cholesterol in terms of cardiovascular health. High levels of cholesterol can lead to stroke or heart attack. If you combine that with other risk factors — such as smoking, age, family history, diabetes or high blood pressure — the risk increases even more. That’s what matters,” Dr. Winslow says.

Dr. Winslow sees about 1,500 patients each year and notes that the majority of her adult patients (starting at age 40) have high cholesterol. She said it’s fairly split between men and women who have it.

In addition to the cholesterol that our bodies make, we get more of the substance from the food we eat. In general, anything that comes from an animal — be it meat, eggs or dairy — has cholesterol. And the American diet tends to be high in cholesterol.

And while Dr. Winslow says she doesn’t like to tell people what they can or cannot eat, “I encourage people to eat in moderation,” she says. “Also, I want patients to explore a diet with more high fiber foods. Fruits, beans and vegetables are known to lower cholesterol levels.”

The Importance of Exercise

“A lot of people in the U.S. struggle with obesity and that’s associated with high cholesterol,” Dr. Winslow says. “Most Americans don’t get 30 minutes of exercise a day. We don’t eat as many fruits and vegetables as we should. If the average American is not getting enough exercise, eating too much meat or dairy and is overweight — that can lead to high cholesterol.”

• Eat more foods with fiber (such as beans, fruits and vegetables)

• Exercise at least 30 minutes a day

And Henn is doing just that. Since her surgery, she’s been walking more regularly, taking Jazzercise classes and doesn’t eat any more fried chicken. No sodas, either.

“I’m not saying I’ll never eat a hamburger or a piece of fried fish, but those foods aren’t part of my diet anymore,” Henn says. “I eat vegetables, lean meats and fruits.”

“Every time I have a test, I know what my numbers are,” Henn says. “I think it’s really important for me to monitor them. I’m responsible for my health and I also have a partnership with my doctors to keep my numbers under control.”

Dr. Winslow agrees and says a good patient/doctor relationship is key to monitoring cholesterol numbers. She says men should start getting their cholesterol checked at age 45 and women should get theirs checked at age 40. Of course, if there’s a family history or risk factors, then these numbers can be checked earlier. Once you know them, make sure to have them rechecked annually.

Dr. Winslow says knowing your numbers is important, but it’s also important to pay attention to your whole health history.

“Ten years ago, the philosophy was all about knowing your numbers,” Dr. Winslow says. “But now, it’s about calculating your risk for heart disease or heart attack. When I treat a patient with high cholesterol, I base my recommendations for them on their risk factors. I use the American Heart Association’s risk calculator to determine my recommendations. For example, if they are young and have high cholesterol, I might recommend diet and exercise. But if they have diabetes or smoke and have slightly elevated cholesterol, I might recommend diet, exercise and a statin.”

She says statins (such as Lipitor) are the most popular prescribed drugs to treat cholesterol. Statins have been shown to significantly reduce risk of heart disease or stroke, by about one-third. The statin, taken daily, decreases the enzyme that’s required to make cholesterol in a person’s body.

New cholesterol medication (such as Praluent and Repatha) are also available; however, since they are so new, insurance providers typically don’t pay for them. Dr. Winslow says she’d want to see more studies before she would prescribe these over a statin.

Henn is vigilant about protecting her family’s health. In fact, her 12-year-old granddaughter got her lipids checked for the first time recently. Her LDL is high.

“I think people are now more aware of how family history can play a role in heart disease,” Henn says. “As patients, we need to be aware of our own family tree and act accordingly. I can’t undo my bypass surgery, but my cholesterol is something I can be aware of. I really work to control it and keep an eye on it.”