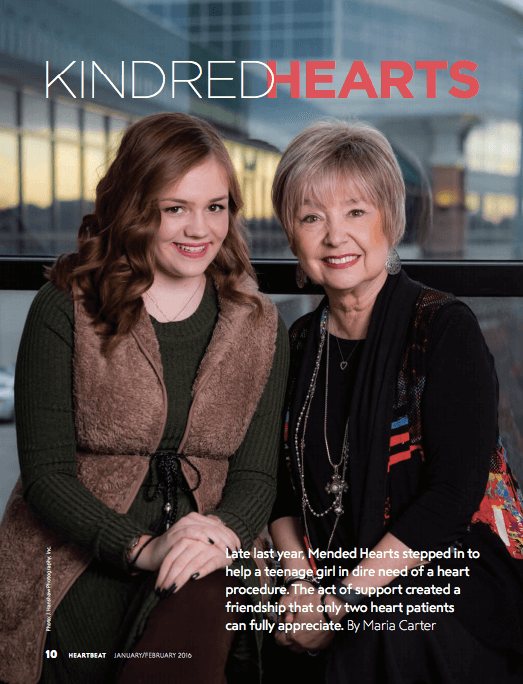 When 16-year-old Hannah Long woke up in the back of an ambulance, she had no idea how she’d gotten there. Her heart had stopped, paramedics said. They were headed for the hospital. This has to be a dream, she thought.

Minutes earlier, the Priceville High junior from Decatur, Ala., had been sitting in the living room at her boyfriend’s house, talking with his parents, when she lost consciousness. “Brandon was trying to wake me up,” Long recalls. “I came to for a second. All I remember is looking at him and falling back over.”

Brandon’s dad checked for a pulse; when he couldn’t find one, Brandon’s mother dialed 9-1-1. The operator talked them through checking for a pulse on Long’s wrists and feet. Still nothing. Without a pulse, they’d need to perform CPR. By the time the ambulance arrived, it could be too late.

Both men were CPR certified. It took eight chest compressions to bring Long’s heart rate back. When paramedics arrived, she was still unconscious.

Fearing that Long might go into cardiac arrest — her heart was racing at more than 200 beats per minute (bpm) — paramedics were preparing to shock her when she opened her eyes.

“I didn’t know what was going on or where I was,” Long says. “I was distraught. I didn’t know what had happened to me…. I’ve had a panic attack before,” she says. “Anxiety doesn’t make your heart stop beating.” Long knew it was something much more serious.

Six months earlier, Long had begun experiencing occasional shortness of breath. She told her mother something wasn’t right with her heart; it felt as if it were speeding up, going so fast Long felt like she couldn’t breathe.

Long’s mother, Melanie Ennis, made an appointment with Huntsville pediatric cardiologist Paul Israel, M.D. After asking about Long’s family history of heart disease — she was born with a slight heart murmur, and her maternal grandfather died during his third heart attack, at age 55 — Dr. Israel decided further testing was needed.

He performed an echocardiogram and placed Long on a 30-day heart monitor. He suspected that her fainting spells were caused by an abnormally fast heartbeat known as supraventricular tachycardia (SVT), but nothing out of the ordinary happened during the monitoring period. They would have to wait, watch and see what happens. She might outgrow the condition, whatever it was.

Four months passed without incident. Still wary, Long took a break from the activities she loved, like cheerleading. “I didn’t want to go anywhere because I was worried I might fall out,” she says. Slowly, she regained some normalcy.

On one of her better days, she felt well enough to attend a friend’s baseball game. Returning home from the game, she began feeling short of breath. As she climbed a flight of stairs to get into her house, she fell to the ground and lost consciousness. She woke up in the hospital, where she learned that her heart rate had reached 180 bpm. She wore another heart monitor, this time for 20 days, but doctors still didn’t have a clear answer. “All I knew is that I was short of breath, and there could be 70 different causes for that,” Long says.

Long’s mother made an appointment with Yung Lau, M.D., a pediatric cardiologist at Children’s of Birmingham, to get a second opinion. His next availability was weeks away. Long would have another trip to the emergency room before Dr. Lau could see her.

A Diagnosis and Some Reassurance

After Long’s heart stopped at her boyfriend’s house, she knew she was lucky to be alive — what if Brandon and his dad hadn’t known CPR? The upside of the frightening event was that Dr. Israel, the cardiologist in Huntsville, finally had the information he needed: data from the ambulance’s cardiac monitor showed that Long was indeed suffering from SVT. The time for taking chances was over. Long needed to get to Birmingham for surgery as quickly as possible.

Though Long’s family was relieved to finally have a diagnosis, they were worried about her recovery and her future. One of Long’s relatives — an aunt named Patricia Alred, who works for Janssen Pharmaceuticals, a sponsor of Mended Hearts — was talking about Long’s condition at the American Heart Association’s Scientific Sessions this past November. Alred shared her niece’s story with several Mended Hearts national staff and board members, including Donnette Smith, President of Mended Hearts. Smith and her daughter also have SVT and have had a procedure to repair it.

When Smith returned home from the conference, she called Long’s mother. “My daughter and I have both had the same type of procedure that Hannah is going to have,” Smith told Long’s mother, Melanie Ennis, who recently passed away.

Smith knew that Ennis was worried about Hannah’s quality of life after the heart procedure. “I told her that my daughter had gone through the procedure at 19, and now she’s married and has kids. Her pregnancies were healthy, and she is living a normal life. Melanie said that made her feel so much better,” Smith says.

The Road to Recovery

Dr. Lau, the Birmingham pediatric cardiologist, diagnosed Long with atrioventricular nodal reentry tachycardia (AVNRT) — a form of SVT common in young adults because symptoms often do not show up until one’s hearts is fully developed, usually in the late teens or early 20s — and began cardiac ablation. He had to induce SVT multiple times to find out where Long’s heart was “firing” incorrectly. The risky procedure could have resulted in Long needing a pacemaker. Thankfully, Dr. Lau’s team found and deadened the extra nerves on Long’s heart that were mimicking an extra heartbeat and causing her heart to stop. The procedure was successful.

While Long was recovering, she received a phone call from Smith. They talked about the physical healing and found they also shared common ground emotionally. Some of Long’s classmates didn’t believe anything was really wrong with her and accused her of faking a condition. Smith could relate.

“I was so upset as a young adult because I couldn’t get anyone to believe that I was really sick,” Smith says. “Hannah went through some tough times at school, and I can remember going through some of the same things. This went on for years, and I got really depressed. Doctors finally were able to find it and treat it.”

Long says the encouragement she’s received from Smith and other Mended Hearts members has given her hope. She adds that Mended Hearts is “a great group of survivors sharing their hope and love for others… It has affected me in realizing I’m not alone.” Long started her own charity, Hannah’s Helping Hearts, to give back to children with congenital heart defects, and plans to get more involved in the Mended Little Hearts chapter in her community. She’s focused on her academic future, making straight A’s as a National Honor Society member, and her budding career as a model — she’s walked the runway for emerging designers at New York Fashion Week twice now.

So far, Long hasn’t had any other health issues. “It’s been a tough, challenging journey,” she says. “It’s a miracle I’m here.”

Editor’s note: Shortly before publication, Melanie Ennis, Hannah Long’s mother, passed away unexpectedly. Our thoughts and prayers are with the family

A message from Chapter 351 in Whittier, ... CA - Let the best kept secret out of the bag and get Mended Hearts information into the hands of Heart Patients around the world!

A message from Chapter 351 in Whittier, CA - Let the best kept secret out of the bag and get Mended Hearts information into the hands of Heart Patients around the world!