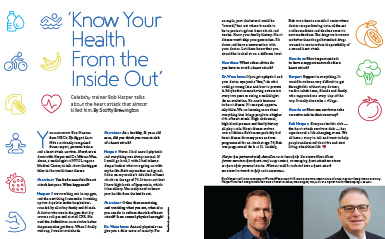 You may know Bob Harper from NBC’s The Biggest Loser. He’s a nationally recognized fitness expert, personal trainer and a heart attack survivor. Heartbeat sat down with Harper and Dr. Warren Wexelman, a cardiologist at NYU Langone Medical Center, to talk about the biggest killer in the world: heart disease.

Heartbeat: You had a near fatal heart attack last year. What happened?

Harper: I was working out in my gym, and the next thing I remember is waking up two days later in the hospital surrounded by all of my family and friends. A doctor who was in the gym that day saw me collapse and started CPR. He used the defibrillator on me twice before the paramedics got there. When I finally woke up, I was in total shock.

Heartbeat: As a healthy, 51 year-old man, did you think you were at risk of a heart attack?

Harper: Never. I had annual physicals and everything was always normal. If I could go back, I wish I had taken a deeper look at what was going on with my health. Both my mother and grandfather on my mother’s side died of heart attacks at the age of 70. It turns out that I have high levels of lipoprotein, which is hereditary. You really need to know your health from the inside out.

Heartbeat: Other than exercising and watching what you eat, what else you can do to reduce the risk of heart attack? Is an annual physical enough?

Dr. Wexelman: Annual physicals can give you a false sense of security. For example, your cholesterol could be “normal,” but not where it needs to be to protect against heart attack and stroke. Know your family history. Heart disease won’t skip your generation. Sit down and have a conversation with your doctor. Let them know that you should be looked at on a different level.

Heartbeat: What other advice do you have to avoid a heart attack?

Dr. Wexelman: If you get a physical and your doctor says you’re “fine,” ask what could go wrong later and how to prevent it. Maybe that means having a stress test every two years or seeing a cardiologist for an evaluation. No one is immune to heart disease. It’s an equal opportunity killer. We are learning more about everything that brings people to a higher risk of heart attack. High cholesterol, high blood pressure and family history all play a role. Heart disease evolves over a lifetime. Bob’s mom probably had heart disease for many years and was programmed for an attack at age 70; Bob was programmed for it at 51. Luckily, Bob was taken to a medical center where doctors are performing state-of-the-art cardiac medicine and also has access to new medications. The drugs we have now are better than the gold standard drugs we used to use to reduce the possibility of a second heart attack.

Heartbeat: How important is it to have a support network after a heart attack?

Harper: Support is everything. It would have been very difficult to get through this without my doctors, cardiac rehab team, friends and family who supported me every step of the way. It really does take a village.

Heartbeat: How can survivors take an active role in their recovery?

Bob Harper: Everyone in this club — the heart attack survivors club — has experienced a life-changing event. We all have a story to tell and want to help people understand the risks and start living a healthier life.