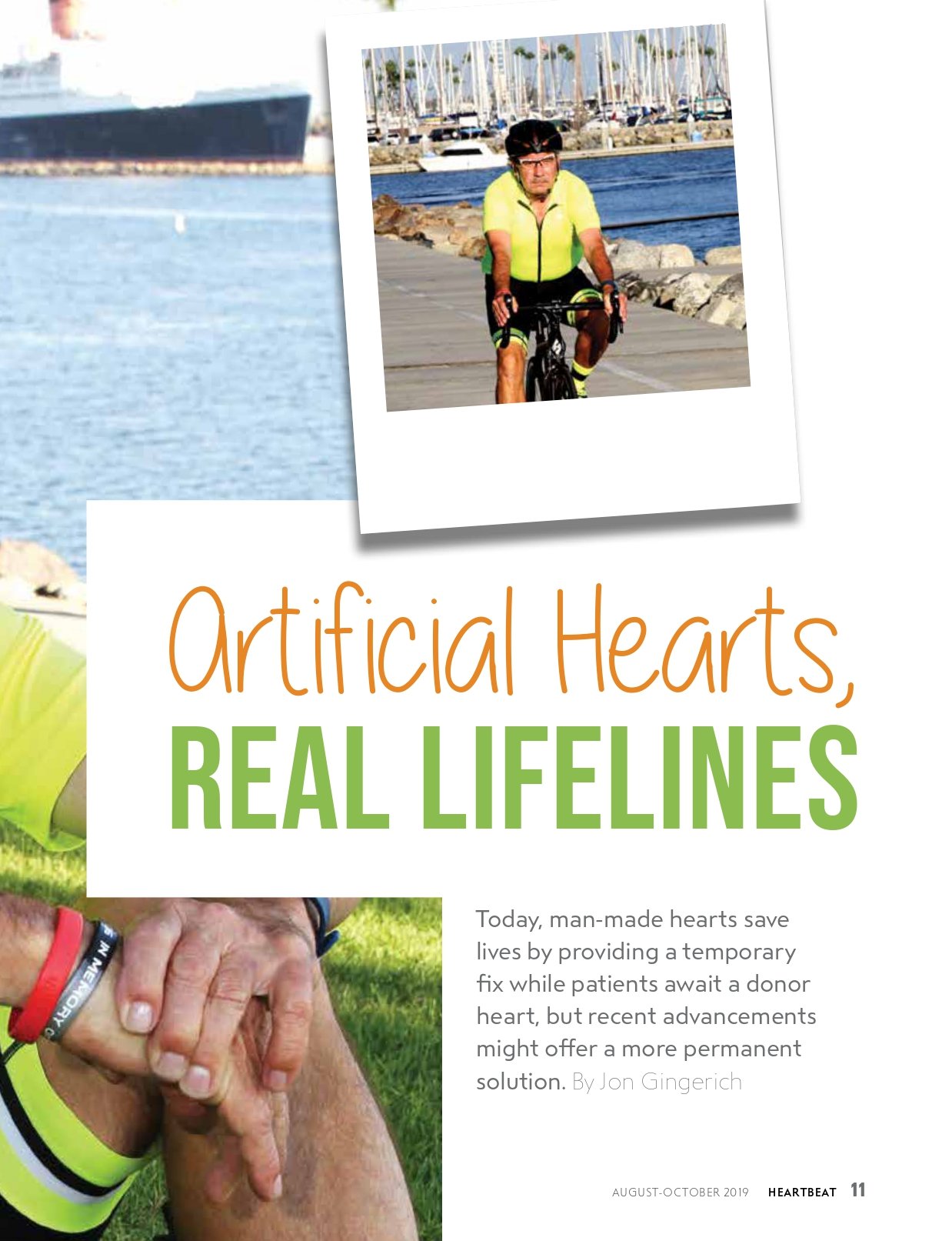 Today, man-made hearts save lives by providing a temporary fix while patients await a donor heart, but recent advancements might offer a more permanent solution.

No part of the human body has acquired an air of myth like the heart. Everything it has come to symbolize over the centuries — an avatar for love, health, romance — suggests we view the heart as something possessing preternatural qualities, a spiritual nexus at the core of the human experience.

Our hearts beat 100,000 times a day, pumping 2,000 gallons of blood across a 60,000-mile network of arteries, capillaries and veins. Given its function, it’s little wonder the organ has attained mythical status.

At the same time, heart disease has become the leading cause of death for men and women in the U.S., killing more than 600,000 annually and accounting for about one in every four fatalities. A series of medical breakthroughs in the latter half of the 20th century birthed devices that could assist the heart or even replace one side of it. More recently, a total synthetic heart that replaces the function of a patient’s native organ has emerged as a viable option for people suffering from a variety of ailments: congenital heart defects, coronary heart disease or circumstances where more than one side of a heart has failed, requiring bi-ventricular support. These devices mark a crucial development in the face of this epidemic and provide the last line of defense when a patient runs out of options.

A Chance at Survival

Johnny Lemucchi, a member of Mended Hearts Chapter 351 in Whittier, California, was among the first 50 people worldwide to receive an artificial heart. Lemucchi’s story is uncommon for a variety of reasons, one being he didn’t know he had a heart problem at the time. His troubles arose during a routine physical, when an EKG revealed findings so alarming his doctor called the paramedics.

Lemucchi was incredulous. He’d always been active, refereeing and coaching high school and collegiate soccer for decades in addition to his work at a meat distributor. Nevertheless, an angiogram conducted at Cedars-Sinai the following morning confirmed a left ventricular ejection fraction (LVEF) — the percentage of blood that leaves the heart — of only 14% (normal LVEFs range from 55 to 70%). His left anterior descending artery was severely blocked, a condition colloquially referred to as a “widowmaker.”

“That was shocking,” Lemucchi said. “I went from running and being very healthy to realizing I could drop at a dime.”

Lemucchi would need a defibrillator and, eventually, a transplant. Insurance complications covering the defibrillator saw him temporarily returning home, and that’s when Lemucchi’s condition took a turn for the worse.

Days later, he returned to the emergency room, where stents were inserted into his artery to get the blood flowing. Doctors fitted him with a life vest, a device equipped with electrical paddles that sounds an alarm when the heart begins to malfunction. That Sunday and Monday, it went off 13 times. Lemucchi’s heart rate spiked and fell precipitously. Doctors shocked his heart back into rhythm, then took him into emergency surgery where a defibrillator was finally put in. Lemucchi returned home. Three weeks later, he went into cardiac arrest.

Back at Cedars-Sinai, Lemucchi was put in a medically induced coma while doctors waited for a donor heart to arrive. By this time, lack of oxygen had caused his organs to deteriorate. It was then that Lemucchi’s family decided an artificial heart offered the best chance of survival.

The human heart has four chambers — two atria that collect blood and two ventricles that pump it to the lungs or circulatory system — as well as four valves that control the direction of blood flow through the organ. A prosthetic heart works much the same way: Blood is pumped in and out of two ventricle chambers, each equipped with two valves. The ventricles are connected to the atria, aorta and pulmonary artery by inflow and outflow connectors.

Made of segmented polyurethane and about the size of two fists, the device is attached to a pair of tubes called drivelines, which exit the body through the abdominal wall and connect to an external driver that pumps the artificial heart by sending pulses of air through the drivelines into the ventricles. Originally, these drivers weighed upwards of 400 pounds and were the size of a washing machine, which unfortunately kept patients confined to the hospital.

But advances in technology have downsized these drivers significantly in recent years, giving patients the freedom to move around with a smaller — albeit still relatively cumbersome — unit outfitted with wheels. Today, patients have the option of an even smaller driver, a portable pump powered by batteries that fits in a backpack. This allows stable patients to leave the hospital when their condition improves and return home while they wait for a donor heart for transplant.

The company’s original model, the 70cc TAH, is essentially an updated, smaller version of the Jarvik-7, the first artificial heart to be successfully implanted in a human in 1982. The 70cc TAH is primarily used for adult men as well as some women and adolescents. A newer, smaller model, the 50cc TAH — which is approved in Canada and Europe and undergoing a clinical trial in the U.S. — is used mostly for women and children.

Artificial hearts have improved vastly over time, but the technology still presents a variety of limitations. While mechanical failure is rare, bleeding and the risk of infection are common, and anticoagulants like warfarin are required to stop blood clots from forming. Of course, owners also need to lug around a 13-pound external air compressor at all times, and a single battery charge lasts only about four hours, so a backup unit needs to be on hand as well. Some physical activities, like swimming, are out.

The greatest setback with artificial hearts is that, right now, they remain a temporary solution; a bridge keeping patients alive until a transplant donor can be found. This is unfortunate, considering that the demand for donor hearts far exceeds supply. About 4,000 people are waiting for a heart transplant in the U.S. at any given time, but only 2,000 hearts become available every year. In the pediatric transplant world, the donor pool is even smaller, typically about 500 hearts every year.

Then there are those who don’t qualify for a transplant for age or health reasons. There’s an appreciable irony in that, in order to receive a heart transplant, patients need to be sick enough to be put on a transplant list — severely ill, in other words — but healthy enough to survive the arduous transplant process, which usually takes at least six months.

For this reason, some researchers have turned to artificial hearts as a destination therapy, or final, end-goal solution as opposed to a transitional stage before transplantation. The creation of a permanently implanted total artificial replacement for the heart has long been considered one of modern medicine’s holy grails. A permanent artificial heart could one day make donor hearts unnecessary and render transplant rejection a problem of the past. Today, the technology has actually gotten good enough and the risk profile has become low enough that this could conceivably become reality.

OHSU’s proposed device completely reimagines how the human heart works, replacing its ventricles and valves with a simple pump design concept, where a hollow titanium tube housing hydrodynamic bearings suspends a rod that moves back and forth, shuttling blood first to the lungs and then to the circulatory system. The single-moving-part design is not only efficient but also reduces the risk of blood damage and blood clots.

It fits most adults as well as patients as young as 10 years old. Like SynCardia’s unit, OHSU’s artificial heart is powered by an external controller and rechargeable battery unit, but is so small that patients can fit it in their pockets.

A prototype of OHSU’s total artificial heart has been successfully tested in cows, and researchers now plan to implant a smaller model in sheep for a series of short-term studies. They hope that clinical trials on human patients could begin within the next decade.

Developments are being made in other areas as well, particularly related to current limitations in the external driver. Some researchers have turned their focus to the idea of a completely self-contained artificial heart, where smaller batteries could be implanted inside the patient and recharged with a transcutaneous energy transfer across the skin. Of course, these feats of cardiovascular engineering present their own challenges; one benefit of an external driver is that users can simply switch to a backup in the event of a power issue. If something goes wrong in a self-contained unit, the patient may require surgery. While none of these developments suggest a panacea, they bode well for a future that can provide better patient outcomes and options while maintaining quality of life.

“Generally, I think we’ve made incremental progress in transplant outcomes. The data shows that the survival curve has definitely improved,” said Dr. Steven Zangwill, Medical Director of the Heart Transplant and Failure program at Phoenix Children’s Hospital. A national center of excellence for pediatric heart transplants, Zangwill’s team made headlines recently when a patient, a 10-year-old boy, became the youngest in history to receive a SynCardia artificial heart.

“We haven’t blown the doors off yet, but we’re getting better in everything from immunology to coronary disease to better devices,” Zangwill said. “I think eventually, we’ll get to the point where mechanical circulatory support options, including artificial hearts, will not be seen primarily as bridge to transplant but rather as a reasonable alternative to transplant, wherein both will offer the expectation of excellent long-term survival with preserved quality of life. The potential is there. Progress is being made. Transplant medicine is moving toward immune modulation that ultimately leads to tolerance, while device therapy is focused on developing smaller, adaptable, fully implantable devices with materials that do not activate inflammation or clot formation. We’re getting there, but we still have work to do.”

The Sound of Life

Lemucchi had his SynCardia artificial heart for 203 days before he received a donor transplant. Now 58, he serves on the board of directors of Mended Hearts Chapter 351 and has spoken at nearly 150 events regarding his procedures and the organ donation process. He’s back to refereeing and working, too. He even participated in the Salt Lake City Transplant Games of America in 2018 along with 900 other athletes, where he competed in four events, including a 20k bike race.

It makes sense that the concept of a synthetic device that completely replaces the human heart would be greeted with some trepidation. Wouldn’t we be skeptical of a machine’s ability to replace a quintessentially human part of us? Would we turn cynical about the prospect of being kept alive by a machine? Lemucchi was not.

“I’m doing this interview, right?” he says. “Without [the artificial heart], I wouldn’t be here. I continued to live life. I saw both of my boys graduate. I got to see the birth of my grandbaby. Without the machine, none of that would’ve been possible.”

Sure, Lemucchi said his backpack driver got him a few stares, but that was a small price for a greater reward. “The sound it made, to me, is the sound of life. That’s my heartbeat. Everyone else’s is on the inside. Mine’s external.”