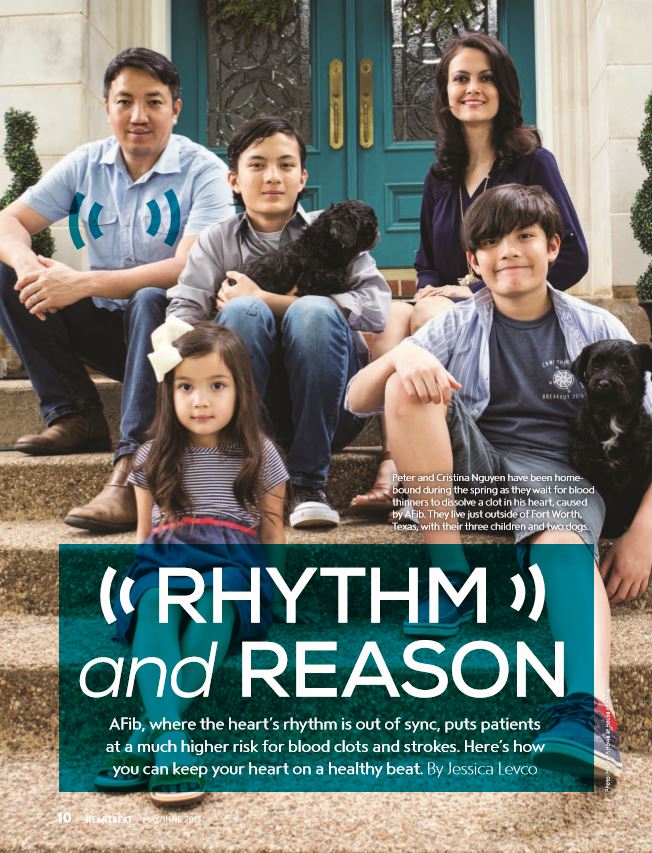 Each year, nearly 3 million people are diagnosed with atrial fibrillation, or AFib, the most common serious heartrhythm abnormality in people over age 65 (although it is not unheard of among young people). The condition occurs when the two upper chambers of the heart (atria) beat, sometimes quite rapidly, out of sync with the lower chambers (ventricles).

Those with AFib have a one in three chance of having a stroke. And although more than half of these individuals are not aware of their increased risk, AFib patient Peter Nguyen is.

That is why his wife, Cristina, stands near their kitchen island, lining up a tidy row of a dozen paper bowls and filling them with fruits and vegetables that she washes and cuts each day for him. You see, Peter — an attorney and real estate manager in Arlington, Texas — loves to snack, but his heart is in a fragile state.

Recently, a virus and a bout with kidney stones triggered an AFib episode and landed him in the hospital, where he stayed for a week in early 2017. While there, doctors performed a TEE scan, putting a tiny camera down his throat to get a closer look at his heart. That is when they discovered the life-threatening blood clot. (When the heart rhythm is out of sync, as it is for AFib patients, it can cause blood to pool and clot in the atria.)

Before moving forward with any procedures to treat the AFib, they sent Nguyen home with a wearable automatic defibrillator and a prescription for blood thinners. Now he is homebound, waiting, praying, for the blood clot in his heart to dissolve. Even a quick drive to the grocery store could cause the clot to dislodge and travel to Nguyen’s brain, leading to a stroke.

The hope is that the blood thinners prescribed by his cardiologist will work their magic and dissolve the clot — but that takes time. Weeks. And if he needs a snack in the meantime, it’s going to be a healthy one, Cristina insists, as she continues to fill bowls with sliced oranges, red bell peppers, mangos and jicama.

Nguyen, who is 40, was diagnosed with AFib at age 32. Although some people with the condition have no symptoms at all, Nguyen’s episodes have generally come with the traditional symptoms: a fluttering or pounding sensation in the chest, shortness of breath, dizziness and fatigue.

He also has cardiomyopathy (an enlarged heart) and heart failure. Nguyen has kept his conditions under control by taking medications and maintaining a healthy weight. And while having high cholesterol is one risk factor for AFib, Nguyen keeps his levels well within a healthy range, according to his doctors.

“Despite what’s happening to me now, I really feel like I have my AFib under control,” Nguyen says. “It takes common sense — eating right, exercising, and not engaging in prolonged, high-stress environments or activities.”

His attitude about AFib is helpful, according to David Schleinkofer, M.D., a cardiologist with Parkview Physicians Group in Indiana. “Once a patient gets their AFib diagnosis, I want them to know it’s not too late,” says Dr. Schleinkofer, who was not involved in Nguyen’s care. “Don’t give up.”

Even the statistics — that you’re five times as likely to have a stroke if you have AFib, for example — don’t paint the full picture because there’s also good news. The National Stroke Association says that 60% to 80% of strokes in people with AFib can be prevented.

There are several lines of defense when fighting AFib. To prevent strokes, cardiologists often prescribe anticoagulants (blood thinners) to their AFib patients. One of the most common — and oldest — blood thinners is called warfarin (Coumadin). Newer ones on the market to treat certain types of AFib include Xarelto (rivaroxaban), Eliquis (apixaban), Pradaxa (dabigatran etexilate) and Savaysa (edoxaban).

“[Blood thinners] don’t change at all the way people feel,” says Geoffrey Barnes, M.D., a cardiologist at the University of Michigan Frankel Cardiovascular Center. “They don’t change anything about AFib. The only purpose is to thin your blood so that you’re less likely to form a blood clot. Which means you’re less likely to have a stroke.” There are also a number of medications available to AFib patients that are designed to either control the heart rate or the heart rhythm.

During a cardioversion, a physician sends electrical shocks through electrodes that are placed on the chest, shocking the heart into a normal rhythm.

With an ablation, an electrophysiologist will thread a catheter through a larger vein and into the heart. He or she will then create scar tissue in the heart, which will block certain electrical impulses and prevent the irregular rhythms.

The maze procedure is an open-chest surgery and is usually only done on patients who need open-chest surgery for other issues, such as a valve replacement. The surgeon creates scar tissue in the heart to prevent irregular rhythms.

Not all AFib patients are candidates for these procedures. Many factors come into play when doctors consider an appropriate treatment for a patient.

“Sometimes, if a patient has just had a few episodes and their heart rate is not that fast, you can see patients as-needed,” says Dr. Schleinkofer. “However, if their heart rate is over 100, they’re more at risk for having a stroke. There’s also a more significant stroke risk if they have high blood pressure, sleep apnea or diabetes,” he says.

(For Nguyen, doctors are recommending a cardioversion, but only after the clot has been treated or dissolved.)

Donna Blevins was diagnosed with AFib and had a catheter ablation in 2011. The procedure was unsuccessful, but her CHADS2 score (an AFib patient’s stroke risk) was in a healthy range, so she was not prescribed a blood thinner. Looking back, Blevins believes this was a mistake.

In 2013, Blevins had a massive stroke on the left side of her brain. Doctors said that it would be months before she would be able to regain her speech, if at all. After her stroke, she could only stay two words: “Donna” and “crap.”

While still in the hospital recovering, Blevins was determined to talk again. “Inside my mind, I made a list of the words you would want to learn to travel to a foreign country,” Blevins says. She also drank a pitcher of water every hour, knowing that the brain doesn’t function as well when the body is dehydrated.

“When I found a ‘word file’ in my mind, I started vocally sounding out the syllables,” Blevins continues. “Clearly, it sounded like gibberish to the medical staff. Without being frustrated and struggling, I stayed engaged in the process and envisioned being able to speak fluidly.”

Blevins says the stroke saved her life. “I was introduced to an electrophysiologist at University of Florida who performed a maze surgery, which is specifically for AFib patients. “The surgery cured me of my AFib. Currently, I’m not on any AFib medication. My heart might flutter for 10 or 15 seconds, but that’s about it.”

The experience of re-learning how to talk prompted her to write a book on the subject: MindShift on Demand: Quick Life Changing Tools.

And despite the doctors’ predictions, Blevins fully regained her speech. Now, she uses the voice she worked so hard to regain to speak at cardiology conferences, including Mended Hearts events, about AFib.

Editor’s note: By press time, Nguyen’s clot had resolved, which allowed his physicians to perform a cardioversion. The procedure was successful and he is no longer in AFib. Nguyen’s ejection fraction (one way of measuring heart failure) improved from 15% to 30% (50% to 70% is normal).

“It’s important for people to know that while AFib is basically an annoyance, it can lead to some serious conditions,” Cristina Nguyen said while her husband recovered from the cardioversion. “The doctor is hoping Peter’s condition can be somewhat reversible, but it will require ongoing, long-term treatment.”